Evidence of mining activity indicates that this spanned a period of 2,000 years and occurred between 12,000 and 10,000 years ago.

An international team of scientists announced the discovery of the oldest ocher mines in the American continent, exploited by humans at least 10,000 years ago, in underwater caves in the Yucatan peninsula, a finding that opens the door to better understand the life of the first inhabitants of what is now southern Mexico.

“It is one of the great discoveries that have been taking place in these decades,” Dr. Roberto Junco, deputy director of underwater archeology at the National Institute of Anthropology and History of Mexico (INAH), one of the institutions that has participated in the discovery.

The researchers, who have published their findings in the scientific journal Science Advances, have established that the mines, found by divers Fred Devos and Sam Meacham, of the Research Center for the Aquifer System of Quintana Roo (Cindaq), inside a system of three caves that were submerged thousands of years ago, were exploited by humans more than 10,000 years ago and for a period of about 2,000 years.

But as Dr. Junco and Professor Brandi MacDonald, from the University of Missouri and who have analyzed the cave samples, pointed out to Efe, the most important thing is that the finding connects with the remains of Naia , the most complete skeleton found in Yucatan of an adolescent woman and between 12 thousand and 13 thousand years old. 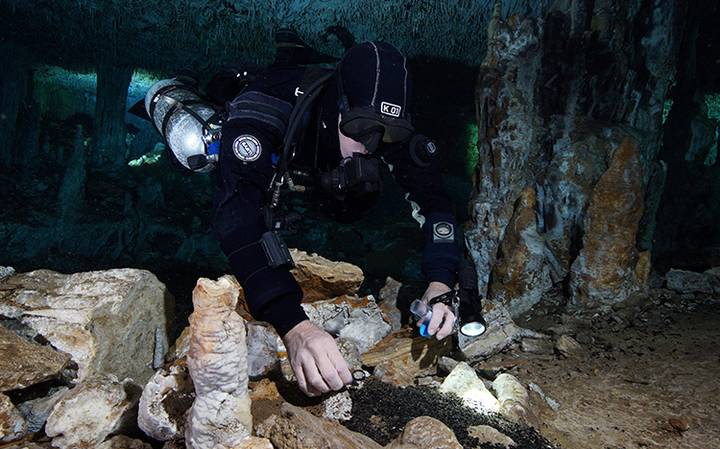 “The possibility that the exploitation of ocher opens up in those very early times is incredible. There are multiple hypotheses but I like to think of Naia with the possibility of painting on the wall of a cave or Naia decorating her face with colored symbols,” Junco said. .

“This possibility of generating art, symbolism, opens a very interesting door for the study of prehistory in Mexico and the Americas. These mines are truly sensational. The oldest known so far in the Americas,” added the scientist. Mexican.

Canadian MacDonald, one of the world’s leading specialists in the study of ocher, a pigment that has fascinated humans for thousands of years and was used to paint caves, decorate bodies, and treat fur, agrees with Junco on the possibilities that opens the discovery of Devos and Meacham.

” Preservation is incredible and allows us to contemplate the mental process of the inhabitants of Yucatan 10,000 years ago. It is not an activity (the extraction of ocher in the depths of a complicated network of caves) that can be carried out by just one person. it needs the collaboration of a lot of people, “said MacDonald.

The value of the ocher

“And there are few opportunities to interpret how the inhabitants of prehistory in Yucatan lived, collaborated and what activities they carried out. This discovery can allow us to do so. For me, one of the most interesting questions that arise is whether the exploitation of ocher was a defining characteristic of Yucatan, “he continued.

“Did people come to this region because of the ocher? For me that is very interesting,” MacDonald concluded.

Devos, the discoverer of the cave network, also highlighted during an interview with Efe the perfect state of preservation of the site.

Devos, who for more than 30 years has been dedicated to exploring underwater caves, recognized his “emotion” when realizing while diving that other humans had walked in those caves 10,000 years ago and that everything was as it was about 7,000 years ago. years.

“It was very impressive,” he explained.

Devos and Meacham made the discovery casually .

“It is a cave previously explored but in 2017 I was asked to make a map, which is one of my specialized ones. During the process I discovered a tunnel in a wall and when we passed we reached a restriction of about 70 centimeters wide,” he explained.

“But since during the tour we saw strange things, stones stacked on top of each other, broken stalactites, we thought that someone had been there before, which was impossible. That made us want to move on. Although it was not easy to pass the restriction with everything the team, we did it, “he continued.

“On the other side we began to see changes in the cave made by humans very clearly. It was the most memorable dive I have done in my almost 30 years of profession,” added the diver.

Devos, Meacham and other Cindaq divers took more than 20,000 360-degree photos and hours of video during that initial dive and another hundred submerged in the following months.

With the help of a supercomputer from an American university, those photos and videos have become a three-dimensional model of the caves, allowing scientists to study the find without having to dive into the caves.

Devos also extracted samples of ocher from underground mines and coal from the remains of fires that the initial explorers used to illuminate the caves. With that material, MacDonald was able to establish the composition of the ocher and date the remains to determine the age of the find.

The analysis of the ocher allows us to venture what may be the reason why the inhabitants of Yucatan ventured for generations inside the caves to extract the pigment.

“The ocher in these caves is of very high quality. It is basically ready-to-use paint. Other deposits are not of such high quality and the ocher has to be purified. The one in the Yucatan caves, when dried and heated, turns from a vibrant red color. It sticks to everything. That’s probably why it was so valued and they took the risk to undermine it, “MacDonald said.