The criminal cell to which he belonged operated in the municipalities of Actopan, Alto Lucero, Emiliano Zapata, La Antigua, and Puente Nacional

She had been released in recent days by a state trial judge despite the fact that firearms, chargers, cartridges, and ballistic vests belonging to the Ministerial Police and the National Guard were seized (Photo: Jovanni Pérez Silva)

The Minion had been released in recent days by a judicial process of the state even though they will be seized weapons fire, chargers, cartridges, and ballistic vests belonging to the state police and the National Guard.

Police reports consulted by Excelsior reported that during a preventive tour carried out on the night of September 14 in the town of Palma Sola, in Veracruz, the agents were ambushed from a house on Pedro de Alvarado Street: they responded to fire and executed two subjects.

When the address was secured, a second shooting occurred, where La Brisa and another man died. According to an internal report from the Ministry of Public Security (SSP), the criminal cell to which they belonged operated in the municipalities of Actopan, Alto Lucero, Emiliano Zapata, La Antigua, and Puente Nacional.

The SSP also stated that those killed are identified with the aliases of Dragon, 96, and Sanidad. They were related to the criminal organization led by Omar “N”, also known as Cóndor, Payaso, or El Ingeniero, the alleged head of the plaza in the Alto Lucero region of the Jalisco Nueva Generación Cartel. 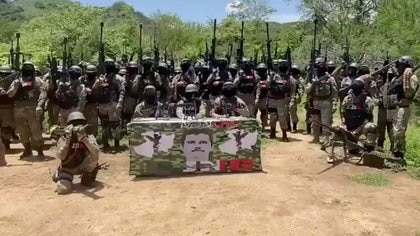 The CJNG, led by “El Mencho”, is credited with the responsibility of two massacres in the state of Veracruz (Photo: Screenshot)

The case of La Brisa appears within the investigation folder 118/2020 / FGE in the Special Prosecutor’s Office in the Search for Uncharted Persons: her photograph was found on one of the cell phones of the five young people who were “picked up” by a command on July 2, reported Proceso.

The five young men were murdered last July in the town of Palo Gacho, in Emiliano Zapata. As they left the bar, armed men subdued them and took them away against their will. The Jalisco Nueva Generación Cartel has caused a wave of violence in the Gulf of Mexico state (Photo: Cuartoscuro)

The WhatsApp profile photo of one of the victims, Cedrik Abdiel Ramírez Aguilar, was updated to an image where you can see half of the face and chest of a woman. He had features of his physiognomy, moles, and a chain similar to those of the official image of La Brisa when the SSP announced his arrest.

In addition, a close friend of Ramírez Aguilar received, through his WhatsApp profile, the message “Don’t look for those anymore, those already …”, followed by emojis of skulls.

Brisas del Mar “N” was also being investigated for the murder of a man in the town of El Faisán, which occurred on September 5.