The United States is considering filing a complaint with Mexico for the lack of approval of US biotech products once the USMCA, the new North American free-trade agreement, comes into force, a senior official of the Donald Trump government said on June 18.

The US Trade Representative (USTR), Robert Lighthizer, said in a hearing in Congress that the United States will ensure compliance with what is negotiated in the Treaty between Mexico, United States, and Canada (USMCA), which will take effect on 1 July to replace NAFTA.

Lighthizer, appearing before the Lower House Ways and Means Committee, said the Trump administration considers Mexico’s failure to adopt American biotech products “a big problem.”The reality is that Mexico has not approved any biotech product in the last almost two years. Our opinion is that this is not right

Lighthizer said that is why the United States plans to initiate “formal consultations” with a view to filing “a State-to-State complaint” under the USMCA dispute settlement system.

“It is a serious problem and it seems almost a philosophical problem with the new government” of Andrés Manuel López Obrador, he added. 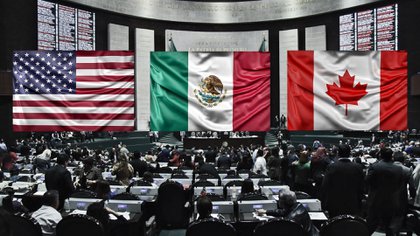 According to the USTR office, “the unprecedented standards for agricultural biotechnology” are a “key achievement” of the USMCA. Lighthizer also referred to possible breaches by Mexico of the labor clauses of the agreement.

“I can assure the Committee that when it comes into effect, we will take action early, and often when there are problems,” said Lighthizer on the labor issue, one of the thorniest in the negotiation of the new trade agreement.

The USMCA, successor to the North American Free Trade Agreement (NAFTA) in force since 1994, was signed by the presidents of the three countries on November 30, 2018, after arduous negotiations started in August 2017 at the behest of Trump.

But his confirmation in the United States Congress was bogged down for more than a year, among other things because of the opposition’s demand for provisions to avoid unfair competition with American workers.

In light of lawmakers’ inquiries about the protected Canadian dairy sector, Lighthizer also said the Trump administration will look to the effective opening envisaged in the USMCA.

“Milk is something that we are going to closely monitor with Canada,” he said. 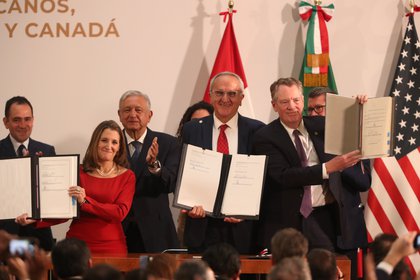 The USMCA, successor to the North American Free Trade Agreement (NAFTA) in force since 1994, was signed by the presidents of the three countries on November 30, 2018 (Photo: EFE / Mario Guzmán)

“If there is any shadow in the benefits for American farmers, we will file a case against them,” he said, trusting that it will not be necessary.

“As of July, the USMCA will come into force,” Valeria Olvera Alvarado , secretary-general of international relations for UNAM , told Infobae México . “We hope that with this, the Mexican economy will benefit more than under NAFTA, since there are at least some clauses that highlight the participation to different degrees of the countries, ” he explained.

The new Free Trade Agreement with the United States and Canada, which replaces NAFTA (the North American Treaty), an instrument that was launched since 1994, will mean a new chapter, classified as “historic” by its members, in the trilateral relations of these nations.