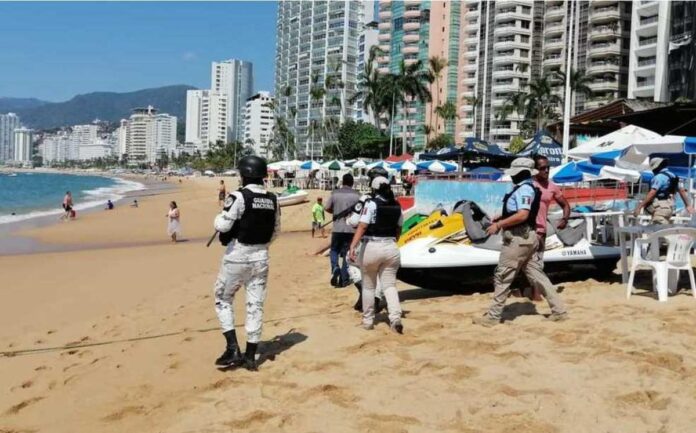 Security authorities reported that they are two tourists from the State of Mexico, who drowned on El Morro beach.

GUERRERO.- Two tourists were found dead on the beaches of Acapulco, Guerrero, after being reported missing on Friday around midnight.

Security authorities reported that they are two tourists from the State of Mexico, who drowned on El Morro beach.

The two men were reported missing on Friday night, on the beach strip almost in front of the “Playa Suites” hotel, in the Golden Zone.

The bodies were identified as Jorge ‘N’, 40, and Abraham Muriel, 24, who arrived at this beach destination with a group of young people from the municipality of Toluca in the State of Mexico.

The bodies of both tourists were transferred by personnel from the Forensic Medical Service (Semefo) of the Acapulco Regional Prosecutor’s Office.

The hotel occupancy of the Triángulo del Sol de Guerrero had a surprising rebound, reaching 51.2 percent in tourist destinations.

In addition, the extra hotel offer in Acapulco and Zihuatanejo also increased.

According to the head of Tourism in Acapulco, José Luis Basilio, at least three factors have influenced greater activity in the tourism market, which has allowed a slight increase in hotel occupancy.

“It is an important sign that the pandemic has been controlled, we are still at a yellow traffic light, the tourist markets are reacting and the vaccine factor (anticovid) has been important because we already see older adults.

“The occupancy, in general, this Sunday in Acapulco was at 51.9 percent, it has been the best weekend in April, since Easter passed,” explained the Secretary of Tourism, José Luis Basilio Talavera.

He explained that in the tourist segments the highest index is represented by the Acapulco Dorado area when registering an occupancy of hotel rooms 56.1%, the Diamond 49.5%, Nautical or traditional with 33.2%.

Guerrero still has a problem with parents selling their daughters

The narco casts a shadow over the elections in Guerrero: candidates abandon campaigns due to death threats