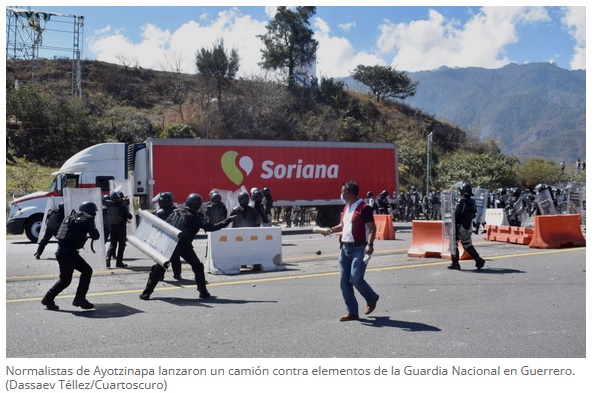 Student protesters from a notoriously combative teachers’ college in the state of Guerrero, Mexico, rolled a driverless semi-tractor truck at considerable speed down a slope toward a line of National Guard and police officers Friday.

The officers got out of the way of the out-of-control freight truck, which crashed into a structure near a toll booth. But the National Guard said 14 of its officers were injured by stones and bottle rockets launched by the students.

The guard was called in after the students blockaded the main highway between Mexico City and the Pacific coast resort of Acapulco.

Students from the rural teachers’ college known as Ayotzinapa have a longstanding reputation for clashing with authorities, blocking the highway in the city of Chilpancingo and hijacking passing passenger buses and trucks.

In 2014, 43 students from the college were hijacking buses in the nearby city of Iguala when they were kidnapped and presumably killed by a drug gang.