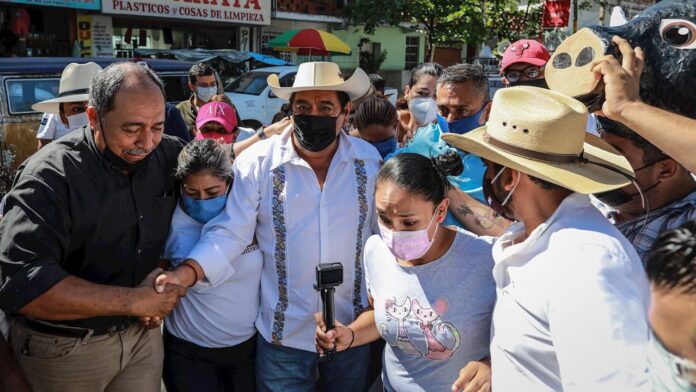 México, City, (April 12, 2021).- Félix Salgado Morena’s candidate for the State of Guerrero Government, launched a new threat against the National Electoral Institute (INE). Yesterday morning, before continuing with his caravan to Mexico City, he warned that if the candidacy is not returned to him, “there will be no elections in Guerrero.”

In CDMX, Morena’s candidate for the state governorship of Guerrero set up a sit-in outside the INE offices and, at a rally attended by the national leader of that party, Mario Delgado, reiterated that there is no document that proves that he carried out pre-campaign acts and announced that he will request impeachment against the electoral advisers.

Last Friday, the Electoral Tribunal of the Federal Judicial Power (TEPJF) ordered the INE to assess whether it upholds the decision to deny him registration as a candidate for governor of Guerrero.

On Saturday, April 10th, Lorenzo Córdova, head of the INE, considered that the application of the law should be guaranteed, while José Luis Vargas, president of the Electoral Tribunal, assured that the electoral institute did not respect the due process by not calling Salgado Macedonio so that he could fend.

Either you approve my candidacy or there will be no elections: Félix Salgado Macedonio told the INE.

He affirms that if the INE tells him that he is not going, then the elections in Guerrero will stop, “top to bottom.”

Félix Salgado Macedonio, Morena’s candidate for governor of Guerrero, threatened to cancel the elections on June 6 in the state of Guerrero, if the National Electoral Institute (INE) does not return his candidacy.

On Saturday, April 10, before continuing with his caravan to Mexico City, in Iguala, Guerrero, he affirmed that, in an agreement with his followers, it was decided that if the INE rejects his candidacy again, “in Guerrero there will be no elections”.

After breakfast with chilaquiles, coffee, and agua de jamaica, the group continued on their way to CDMX, where they arrived in the early afternoon, to set up a sit-in outside the INE headquarters.

There, the licensed senator insisted that the INE went too far by taking away his candidacy since there is no document proving that he carried out pre-campaign acts.

For this reason, he insisted that he will remain firm in his demand that the candidacy that was taken from him be returned.

“We have been fighting for the dignity of a people that, for many years, has been run over and now the time has come, now or never, not a step back,” he said during the rally in which he hardened his position against the electoral advisers, against whom he will request impeachment for undertaking a “dirty campaign” against his political aspirations.

“We do not crack, there is no going back, we go forward,” Salgado stressed in front of his followers, who accompanied him from Acapulco to Mexico City, in a caravan that began last Saturday, with the purpose of putting pressure on the INE to approve his candidacy.

For his part, the national leader of Morena, Mario Delgado, said that this political force will defend democracy, as President Andrés Manuel López Obrador taught them.

Finally, Salgado Macedonio said that they will remain outside the INE until the councilors comply with the mandate of the Electoral Tribunal, to define the candidacies within a period of no more than 48 hours.