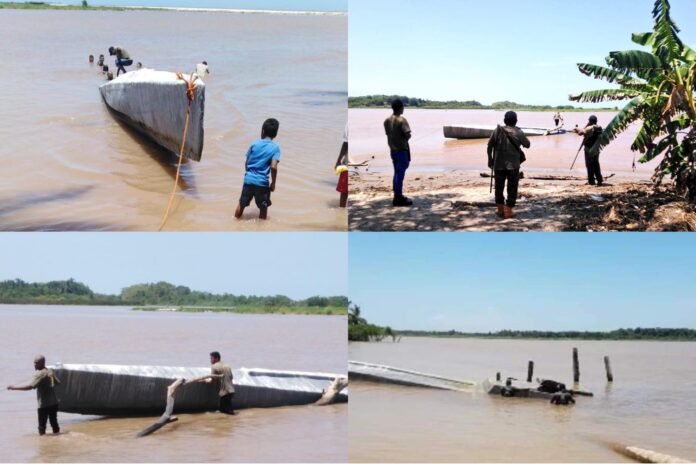 Members of the National Guard and the Navy are guarding the submarine that emerged in the community of Barra de Tecoanapa, municipality of Marquelia, due to the weight of the ship, about 15 meters long and one meter 30 centimeters wide, the crane workers were unable to lift it onto the platform.

First, the fishermen and locals of Barra de Tecoanapa opposed the authorities removing the submersible, since they requested that it be opened in its entirety to find out what it was carrying, as stated by the fisherman Marcelino Ayala Cruz, who reiterated that this would be a good tourist attraction, such as the mermaid that is at the entrance of the town, where visitors take the photograph of the memory.

Subsequently, they agreed to allow the submarine to be transferred but they could not raise it to the platform crane because, according to residents, the ship has gasoline drums inside, at least a thousand liters of fuel.

Later, the object was dragged with ropes by members of the Guerrero self-defense groups to the shore, where it was reviewed and photographed until the federal security elements arrived to begin with the corresponding protocol that would allow the case to be followed up.

Submarine found in Tecoanapa would be from Ecuador or Colombia

Due to the remains of canned food that were found as “Isabel” brand tuna and sardines, it is presumed that the boat comes from Ecuador or Colombia, countries where this brand of canned food is distributed.