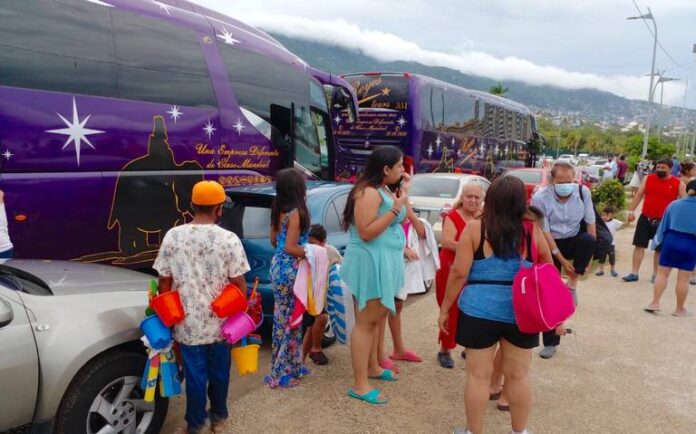 The three destinations that make up the so-called Triangle of the Sun registered an overall stay of 56.7 percent

Despite the bad weather, the state’s Secretary of Tourism reported that the Ixtapa-Zihuatanejo tourist binomial reached a hotel occupancy of 68.3 percent.

By zones, Ixtapa reached the highest stay of 73.6 percent and Zihuatanejo 39.9 percent

The three destinations that make up the so-called Triangle of the Sun registered an overall stay of 56.7 percent.

The colonial city of Taxco de Alarcón this Sunday registered a high hotel occupancy of 53.9% compared to what has been registered in previous days.

Acapulco in its condominium area reached a stay in the Diamante area of ​​19% and Dorada 14 percent.

Tourists insist on entering the sea drunk in Zihuatanejo

The Commander of Civil Protection and Firefighters of Zihuatanejo, Geovanny Medina Galena, reported that unfortunately there are still tourists and residents who are reluctant to enter the sea, as they do so at unauthorized hours and under the influence of alcoholic beverages, putting their lives at risk. life.

Although the dissemination of recommendations is constant, there are people who seem not to be interested; While it is true entering the sea requires care and prevention, doing so in unsuitable conditions increases the chances of drowning.

But as if that weren’t enough, the bathers are rude and sometimes violent, because they feel offended, even though the only thing the lifeguards want is to take care of them.

So far this year the Directorate of Civil Protection has provided at least nine rescues of people who were about to die by drowning, not counting those rescues made by restaurateurs and hoteliers.

The beaches where the greatest number of marine rescues have been presented are: El Palmar, Blanca, and Larga mainly, it is here where bathers should pay special attention.

They are ready to implement support plans, said President López Obrador; the National Water Commission predicted the impact of hurricane “Rick” between Zihuatanejo and Lázaro Cárdenas

According to the forecast, torrential rains of 300 and 400 millimeters are expected for the next 48 hours, so authorities have called on citizens to locate the closest temporary shelters, not expose themselves, do not leave the house if not necessary, no to ignore the agency’s statements and take precautions, especially those citizens who live in high-risk areas.

According to the report of the National Meteorological Service (SMN) issued at 4:15 p.m., the category 1 phenomenon on the Saffir-Simpson scale was located approximately 285 kilometers southwest of Acapulco and 315 kilometers south of Lázaro Cárdenas, Michoacán, so the rainfall will continue.