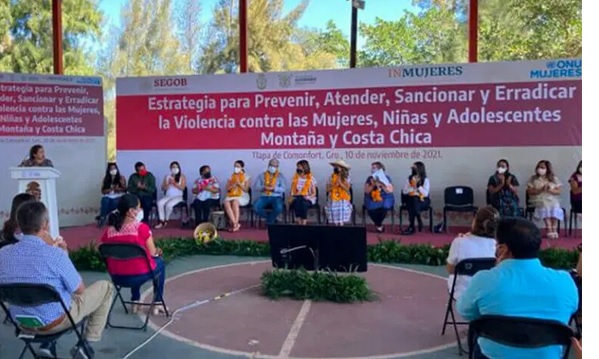 The federal government’s women’s rights agency has launched a strategy to prevent violence against women and girls in the Montaña and Costa Chica regions of Guerrero, where forced marriages continue to take place.

Nadine Gasman Zylbermann, head of the National Institute for Women (Inmujeres), presented the strategy Wednesday at an event in Tlapa de Comonfort, a largely indigenous Mixtec municipality in the Montaña region.

State and municipal authorities will collaborate with the federal government on its implementation.

She said the new “comprehensive strategy” will guarantee women’s right to equality and access to basic services.

Gasman also said there will be a permanent collaboration between federal, state, and municipal authorities on women’s issues, and that Guerrero women and United Nations agencies will participate in a process to identify women’s main needs in the areas of health, diet, education, employment and access to natural resources “so that women have full autonomy.”

Guerrero Governor Evelyn Salgado committed to establishing a state system, and municipal systems, to prevent, respond against, and punish violence against women in the state.

“We’re going to walk hand in hand with all of you in your communities. With all women who live in the Alta Montaña (High Mountain), region and in all regions of Guerrero, we’re going to give you all the support … of this government,” Governor Evelyn Salgado said.