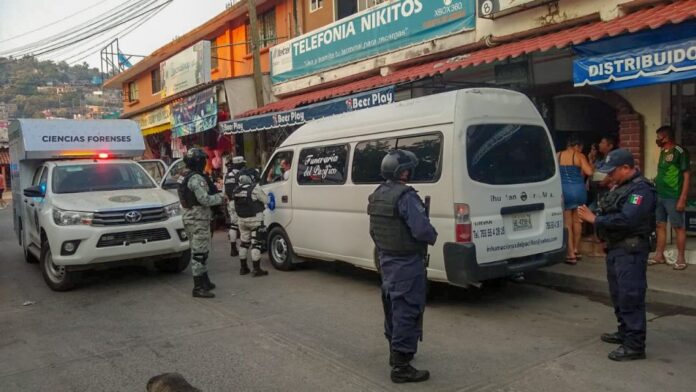 Woman chased in the heart of Zihuatanejo and killed

Zihuatanejo, Guerrero.-  A woman was chased in the heart of Zihuatanejo, and murdered inside a video game store, on Saturday afternoon.

Around 5:00 p.m., the police authorities were alerted through a call to 911, indicating that on Morelos Avenue in the Plaza “Libertad de Expresión”, in the Centro neighborhood at the height of the telephone distributor with business «Telcel», a woman had been attacked with firearms.

State police went to the place and inside the “Beer Play” de juegos de “maquinitas”, they found a lifeless woman.

Some witnesses indicated that she was being pursued by a subject who was carrying a firearm in his hand, and when the woman tried to take refuge inside the aforementioned business, the aggressors shot her repeatedly.

The victim wore black shorts and a white blouse. She was later identified in the same place as Silvia “N”, 37 years old.

Experts from the State Attorney General’s Office (FGE) carried out the legal procedures and then the body was transferred to the “Del Pacífico” funeral home, authorized as a Forensic Medical Service (Semefo), where the corresponding legal procedures would continue.

On November 21, 2021. A man was shot to death in the neighborhood of La Majahua from Zihuatanejo.

Sources from the State Attorney General’s Office (FGE) reported that at 2 in the afternoon they received a report from a
Dead person on the Scenic-La Majahua highway.

State police confirmed the finding of the man shot to death lying on the road. In the place, there was a 380 mm caliber percussion cap.