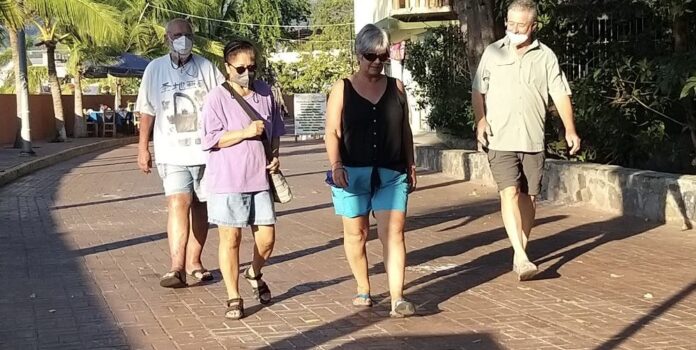 In Ixtapa-Zihuatanejo during the winter season, foreign tourists, Mainly Americans and Canadians, contribute to economic activity, as many choose this place to spend the cold months instead of their countries and make local consumption in inns, restaurants, bars, and local businesses.

The months from December to March are considered as the winter season and that is when foreign tourists begin to arrive,
says Mauricio Cancino González, owner of the El Arrayán restaurant, located in the La Madera tourist neighborhood, who for more than 12 years old, she attends these visitors for lunch and dinner, “as soon as November begins, we see the Güeros strolling through the Suburb”.

Cancino assures that Canadians are the ones who stay the longest in Ixtapa-Zihuatanejo, during the winter season, “the
Canadians and Americans are the ones who most come to visit Zihuatanejo, as well as other nationalities, but 90 percent of foreigners are from Canada and the United States. The Canadian is seen in the movement when winter arrives, they take advantage of this season because it is very cold there and they run to Zihuatanejo, to look for a more pleasant place ”.

The restaurateur assures that what Canadians like the most is the climate of Zihuatanejo, “yes, Zihuatanejo benefits from the arrival of foreign tourists, in what percentage? I could not tell, but if you ask in the other businesses, they will all agree that they are very careful in their spending. They do not spend to spend, but they do consume in restaurants, bars, and local businesses, such as convenience stores. groceries and in the municipal market itself ”.

He argued that because many of these foreigners have spent the winter season here previously, some of them already have their own home, which they also put up for rent during the time that they do not occupy it; others rent for up to four or five months apartments, villas or rooms, both in La Madera, as well as in the tourist colony La Ropa, in the center of this port or even in the residential area of Ixtapa, “but they like the port of Zihuatanejo more, for its tranquility and the proximity to local businesses, where they come to stock up on groceries ”.

He assures that foreigners “are very supportive of each other, to find places in an economic way. If you see or know of a place that is economically convenient for them, that is good, beautiful and cheap, there they are, and I think that is their culture, mainly Canadian and Zihuatanejo does benefit in that sense. I think that everyone, in some way, has an income from them ”.

“The American comes and spends more, we say, he consumes more.

They bring a list of restaurants and businesses where to consume, but the Canadian seeks more affordable options. They take more care of their spending, though his money yields 18 to one, with his pure pension they live comfortably during those months, comfortably rent a small apartment of 5,000, to 8,000 pesos, with a kitchenette, they go out a day or two a week for dinner. They look for two for one deals, many times where they are offered promotions, and they are more careful in their spending ”.

For restaurateurs, owners of apartments and villas, galleries and bars in the La Madera neighborhood, these winter months “are the
better, because the colony has more life with the arrival of them. It has more tourist life and you feel, because if you pass by here in the low season, which is from August to October, you can practically see a deserted colony. The empty beach, we have national tourism at the end of the week but it is from November to March or April when we have the visit of foreigners and most of them are Canadians and Americans ”.

He said that a “great quality” of these visitors is that “they are very supportive of many people. They have formed civil associations to support the children of Zihuatanejo, in improving some schools. There is a guitar festival and a sailing festival, which they organize between them to support the children of our municipality. We, as entrepreneurs, also support them, for example, my business has supported with dinners that they raffle at those festivals, and with that money, they help poorer schools in Zihuatanejo ”.

“They do altruistic work at the same time that they vacation and enjoy themselves and have many friends. Many have already bought their houses here and They come for three, four months to live and they also do it for business, it should be noted because those houses also rent them. I have friends who tell me that they are going to rent their house and look for another option during the days that they have rented their house, some of them have their house of vacations and they rent them ”.

Mauricio Cancino assures that last year, in the 2020 winter season, when Canada closed its borders and did not allow the exit of
his compatriots abroad, due to the Covid-19 pandemic, the absence of Canadians, “it was felt, yes, it was felt, it has been two very years complicated for the entire tourism sector, especially for those who in one way or another offer the most service to foreign tourism, to tourist guides, to hotels that completely canceled them because they did not travel, they were forbidden to travel ”.

“So whoever stayed here, some stayed because when the pandemic hit they couldn’t go back to the United States or Canada,
They were the ones we saw but the season fell by more than 90 percent and in this year the truth is that a rebound is felt, then later it is felt, yes there are more tourists, we have also talked with some of them and they say that after almost two years, they too are eager to go out on vacation and that will also benefit us ”.

He adds that from talks he has had with some owners of small hotels and guest houses in the same neighborhood, some Foreigners keep their reservations for the months of January to March, but there is uncertainty due to the Omicron variant of Covid-19, “That is worrying that entering the year, the United States and Canada say again that the borders are closed, we do not know if we can do that support in Zihuatanejo, if we can get ahead with the small hotels and restaurants that depend directly on tourism ”.