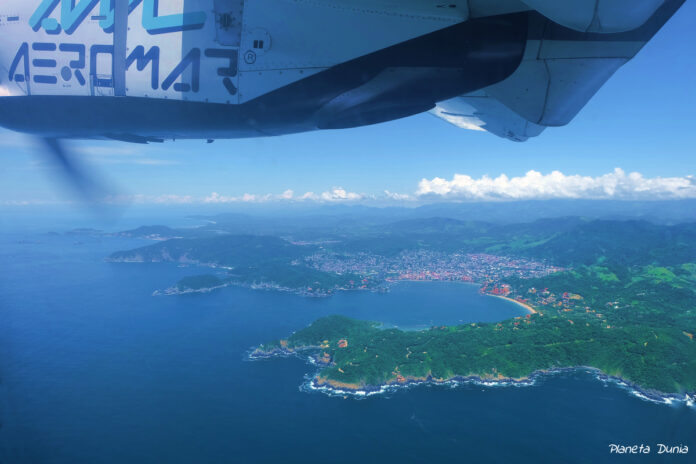 In Ixtapa Zihuatanejo we find 2 paradises of the Mexican Pacific separated by just 10 kilometers apart. Ixtapa has a first-class infrastructure and tourist equipment with spectacular hotels that you will not want to leave and Zihuatanejo has preserved the essence and charm of a traditional and small fishing village on the Mexican coast.

How to get to Ixtapa Zihuatanejo

Aeromar is the airline in charge of connecting Mexico City with a direct flight with the Ixtapa Zihuatanejo International Airport. The advertising slogan of the Ixtapa Zihuatanejo Tourism Office: “A trip two paradises” is a success that very few destinations can offer to the visitor and if you travel to the State of Guerrero you will discover it.

The Riscalillo Scenic Highway starts from the Ixtapa Zihuatanejo International Airport, considered one of the most beautiful highways in Mexico, so views and surprises “on the road” are guaranteed.

The first paradise in the Mexican Pacific that I want to show you is Ixtapa; a place where nature has been generous and its inhabitants are aware that nature must be preserved. In Ixtapa it is not so much about what to see, but about how, where and what to enjoy.

In Ixtapa you can enjoy:

Where to sleep in Ixtapa Zihuatanejo

If one day I can live in a hotel, the most likely thing is that I will end up domiciling myself in Azul Ixtapa Grand, whatever I say about this hotel, I will fall short in praise (shortly I will dedicate a complete article so that you know in depth this piece of hotel).

More than half of the rooms in the Superior Category hotels in Ixtapa Zihuatanejo are exemplary, so choose a good hotel and you will become a Hollywood star for a few days.

What to do in Ixtapa Zihuatanejo

As you may have noticed by now, I have started this travel story, almost where it should have ended, with recommendations on how to get to Ixtapa Zihuatanejo and where to sleep. So let’s quickly remedy it!

We could have gotten up early to go see the fishermen arrive with their abundant catch at El Palmar Beach in Zihuatanejo or buy fresh fish from the sea at 7 in the morning at Playa Principal.

But the best of what to do in Ixtapa Zihuatanejo in one morning wins, the option of snorkeling in virgin beaches. We begin our discovery of the charms of the Bay of Zihuatanejo, embarking in Puerto Mío aboard a catamaran called  “Picante” .

On the “Picante” catamaran the team welcomes us with contagious joy, dancing music and an open bar of drinks. As we skip gliding through the Pacific waves and sunbathe, we glimpse a rugged coastline full of charm before us.

Zihuatanejo is a destination committed to the preservation of the environment, the flora and fauna of its surroundings and that is noticeable with the naked eye. Kilometers of coastline without buildings, kilometers of secluded beaches, kilometers of ocean with abundant marine life and kilometers of not wanting to leave this paradise of the Mexican Pacific.

Troncones Beach, Majahua, Barra de Potosí  (one of the essential excursions that must be done in Ixtapa Zihuatanejo), La Barrita and the beaches of Zihuatanejo Bay, are officially whale watching points during the official watching season that covers each year, between December 15 to March 20.

On the reefs of Playa Manzanillo, Las Gatas or El Zacatoso you can observe marine fauna and a large number of species under the sea with the naked eye and at any time of the year.

The attractions of Ixtapa Zihuatanejo are such that they have made it worthy of several awards, including being one of the five best cities in Mexico or achieving for the seventh consecutive year, the first place as the best beach destination in Mexico, in the World Travel Awards 2020.

In the bay of Ixtapa Zihuatanejo, you can also do all kinds of water activities from snorkeling and diving, to surfing, longboarding and paddle surfing. Its warm waters attract surfers from all over the world who want to catch a good wave! And they can do it at any time of the year. For those who prefer to play with their feet on the ground and are lovers of cycling, a bike path has recently been inaugurated. The 25 km long bike path connects Ixtapa with Zihuatanejo and enters the Aztlán Ecological Reserve.

What to see in Zihuatanejo

We attended the inauguration of the Paseo del Pescador de Zihuatanejo on September 30, 2021. A date to remember given the importance of the event where the governor of Guerrero Héctor Astudillo Flores could be seen with the mayor of Zihuatanejo Jorge Sánchez Allec. The Zihuatanejo boardwalk links Playa Principal with Playa La Madera with new cobblestone pavement, several bronze sculptures, shops, restaurants, and new gardens.

In the Zihuatanejo Handicraft Market you can find better prices than in Mexico City, more than half the difference! So if you are a shopping lover or you are one of those who buy gifts to set up a store, I assure you that you will love this market. The most typical products of the region are palm articles, such as baskets, bags and hats, and parota and cedar woodcrafts carved and painted by hand by the local artist Magdaleno Flores.

Where to eat in Zihuatanejo

Zihuatanejo is a gastronomic destination where you can experience Mexican cuisine at its best. The foodies are in luck in Zihuatanejo as their dishes are based on products from the sea and land. Fish, shellfish, seeds, farmyard animals or insects are part of several of the dishes of Guerrense cuisine that should be tried on a trip to Mexico.

The list of dining suggestions going from the filling Cuche (pork and vegetables cooked in the oven), tiraditos fish, mashed fish to the green pozole (stew of corn with meat), without forgetting the most emblematic drinks like chilate with cocoa, rice, cinnamon and sugar or the exceptional cupreata mezcal.

In the Paseo del Pescador 70 in Zihuatanejo is the Angustina Restaurant where the creations of Chef Felipe Meneses await us who, together with his brother the mezcalier Antonio Meneses, discover that insects can also be eaten and they taste delicious. Along with a great variety of dishes that has nothing to do with the Mexican cuisine that we know in Spain. An exceptional mezcal pairing that they make themselves must be added to the gastronomic experience.

Visit Ixtapa Zihuatanejo, you will love it!

To thank the travel wholesaler NuevaYork360 and the travel agency ViajesKrrteando, for the opportunity to publicize and visit the State of Guerrero. All the material generated on social networks during my trip to Mexico can be consulted through the hashtags # ViajoconNuevaYork360 and # VisitMéxico.