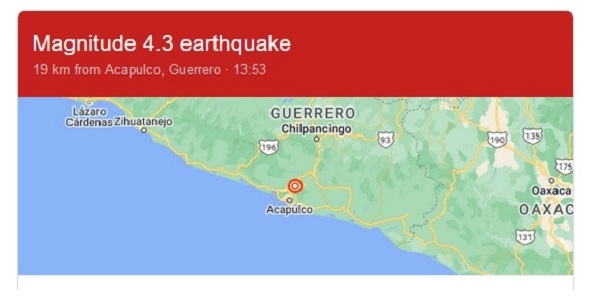 An earthquake warning system sounded in Mexico City on Friday after a moderate earthquake struck near Acapulco in nearby Guerrero state, though initial reports said the quake was not felt in the Mexican capital.

A quake of magnitude 4.8 was reported in Guerrero, according to Mexico’s national seismological service.

The national alarm was activated in the cities of Mexico City, Chilpancingo, Acapulco, Oaxaca, Morelia, and Puebla.

There were no reports of damage in Mexico’s capital.

The Seismic Alert System is usually activated when the telluric movement has a magnitude of 6 degrees, however, it is not the only factor that makes it sound.

According to information from the National Center for Disaster Prevention (CENAPRED), the alert is activated when “a moderate earthquake with potential damage occurs.” However, “if the earthquake is very far away, it may not be perceived, but it may be recorded by the instruments.”