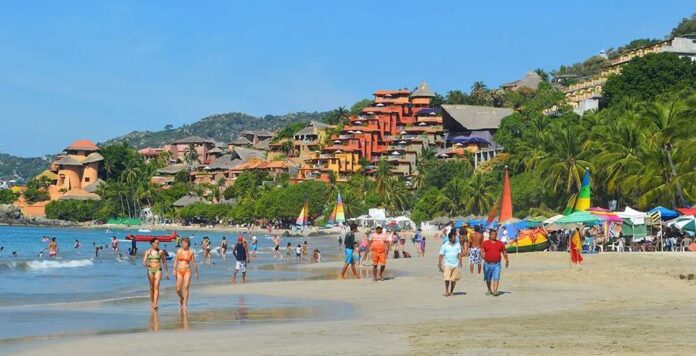 The so-called low season for the tourism industry in Ixtapa-Zihuatanejo has begun, and although it is true that in recent days the arrival of tourists has reduced, those who arrive are of higher purchasing power and leave a good economic impact, hoteliers of the destination reported.

The Manager of the Azul Ixtapa Hotels, Luis Castañeda Muñ0z, commented that for the first days of the month of May, despite being historically considered a complicated month, this time an opposite phenomenon is occurring.

They attribute this situation to the fact that many visitors decide to vacation at this time and not during Easter or other vacation periods because there is a lower concentration of people and in this way, the chances of getting infected by Covid-19 are reduced.

There are inns that implement various promotional strategies to attract visitors at this time of year, one of the strongest and that represents the best results is electronic sales for the national and international segment.

Luis Castañeda added that another important factor is the promotional work carried out by the municipal and state governments, to position themselves and not let the destination fall during the critical stage of the pandemic.

From small families to large groups, at the beginning of the month of May, visitors have shown that the beach binomial continues to be a favorite, no matter the time of year.

The foreign community in Zihuatanejo is registering significant growth

The federal government, through the Interior and other agencies, is granting many facilities so that a growing number of foreigners can legally extend their stay in our country, especially in beach tourist destinations. where the climate attracts them, and they even acquire Mexican nationality, as occurs in the municipalities of the Costa Grande de Guerrero.

Interviewed in this regard, Ignacio Salazar Bazán, who personally is a friend of many retired Canadians who have decided to remain in Zihuatanejo and neighboring towns, stated that the foreign community is experiencing rapid growth this year; they know the place and are very pleased to the point of starting the procedures for their nationalization, opting to settle in places like Troncones, Saladita, Barra de Potosí, Playa Larga and other places where they are already working to improve the economy as well as the social conditions in general.

He mentioned that it is important to strengthen the promotion of Ixtapa-Zihuatanejo at the international level, so that the influx of visitors is maintained throughout the year, not only in seasons like the current one, which after two years of not picking up due to the issue Covid, today our tourist destination is experiencing one of the best times since 2021, it is what really has to occupy greater efforts on the part of the government authorities, and he insisted that many Canadians who are arriving intend to stay and live.

In another order of ideas, Ignacio Salazar Bazán, who lives in the ejido of Agua de Correa, reported that another benefit granted by the federal government is through the Sembrando Vida program, which promotes the planting of trees in the region, “we are in the process of being able to receive the expansion of the program, we are fighting to get the authorization; there are more ejidatarios who are not in the program, so they prepare their documents, I am as a producer, we are a group of 28 with approximately 76 hectares to reforest in the ejido”.