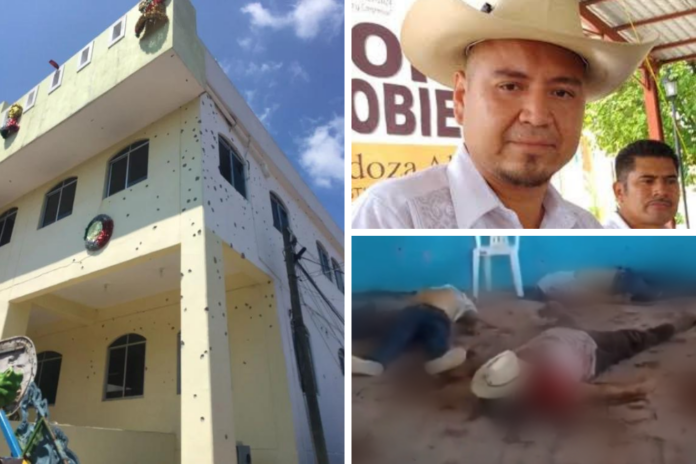 The criminals attacked the personal home of the municipal president of San Miguel Totolapan and cut off the exits of the small town of Tierra Caliente, a focus of organized crime.

In a small town in Guerrero, the worst evils of Mexico have been concentrated this Wednesday. A group of armed men broke into the municipal palace of San Miguel Totolapan in the afternoon and shot dead the mayor and at least 19 other people, including several police officers. According to local media, the house of the councilor, Conrado Mendoza (PRD), was also attacked, and blockades were registered in different parts of the town. The wounded amount to at least 20 according to the same sources. The unstoppable power of drug mafias once again represented in one of the poorest and most forgotten corners of the country.

The action has been claimed on social networks by one of the mafias in the Tierra Caliente area, one of the red territories of Mexico. Among the victims is the father of the current mayor, also a local politician, and several policemen who tried to repel the offensive. Photos that circulate through social networks show the facade of the municipal palace upholstered with dozens of bullet holes after the event. The images also show several bodies in the streets surrounding the government building.

It is not the first time that the city hall building has been attacked, according to local media. On at least three other occasions in recent years, that façade has received everything from bullets to grenades. San Miguel Totolapan, with just 20,000 inhabitants, is located in the heart of Tierra Caliente, a crossroads between the states of Michoacán, Guerrero and the State of Mexico. For years, the area has been a bastion of organized crime mafias, production territory and a transit route for the drug trade through the Pacific corridor.

From poppy cultivation to the proliferation of clandestine laboratories for synthetic drugs such as methamphetamine or fentanyl, drug trafficking networks have been fighting over this area of ​​the country for more than a decade. The group that has claimed responsibility for the attack is known as Los Tequileros, a split from La Familia Michoacana, the powerful organization that dominated the area during the worst years of the so-called drug war – which began in 2006 – and is now in decline. “There is a dispute with a criminal group known as the Familia Michoacana, who are the criminal leaders of that region,” the undersecretary for security, Ricardo Mejía, acknowledged on Thursday morning.

Tierra Caliente is also home to the stronghold of the Jalisco New Generation Cartel, the most powerful mafia in the country, and the homeland of its leader, El Mencho, one of the most wanted criminals by the United States Drug Enforcement Agency (DEA). acronym in English). This is the town of Aguililla, in the state of Michoacán, which for months has functioned practically as a zone liberated from the authority of the state, where criminals did and undid before the eyes of the Army, deployed on the outskirts of the town. An example of the containment policy implemented by the López Obrador government, which in any case has accelerated the pace in recent months with greater intervention in the area.

During last year’s elections, several local candidates in this territory, including the town of Guerrero where Wednesday’s attack took place, literally had to ask local gangs for permission to campaign. Many of them resigned due to threats from the mafias. The governor of Guerrero, Evelyn Salgado, has lamented the aggression against municipal officials. “I have asked the Prosecutor’s Office to speed up the investigations and clarify the facts,” Salgado has written on her social networks.

At the moment, 10 of the 18 deceased have already been identified: