There are 24,036 confirmed active cases in the country, which represent the active epidemic in the Mexican Republic

This evening conference is number 117, on day 24 of the ” new normal”, under the epidemiological red light (maximum alert) in 15 states, including the capital, and with 17 states on orange alert (high risk); which will remain in this way until next Friday when the information is updated. 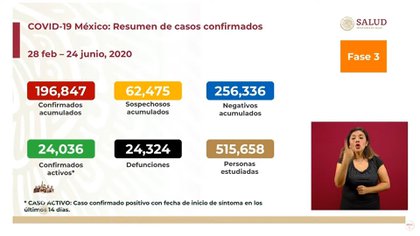 The official reported that there are 40,219 active suspected cases, a number that almost doubles that of confirmed cases, which are concentrated in Mexico City, Mexico State and Puebla.

On the international scene, the World Health Organization ( WHO ) registers America as the place where the majority of confirmed cases are concentrated, with 1,091,555. 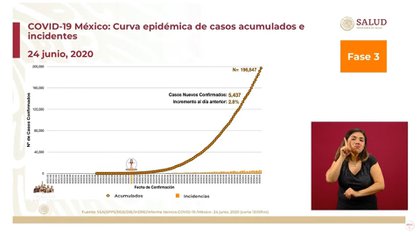 On the other hand, of the new cases of deaths, 947 were registered in the last 24 hours. Of these, 603 correspond to patients of the IMSS, 223, from hospitals of the Ministry of Health and 111 in other places.

Among the more than 196,000 accumulated cases of infected, there are 62,475 suspected cases. According to the estimated epidemic curve of the health authority, they represent a decrease from before June 15.

Most of the suspects have been detected by the Ministry of Health, followed by “other” hospitals, the IMSS and the ISSSTE, respectively. 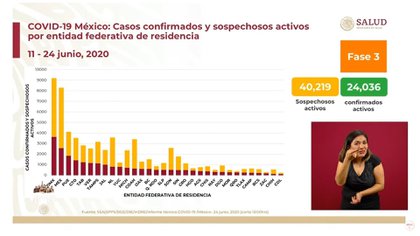 In addition, this day Dr. Alomia presented a new informative category, which corresponds to the number of people recovered. As of Tuesday, 113,596 patients, or 58%, were able to heal after contracting the virus. 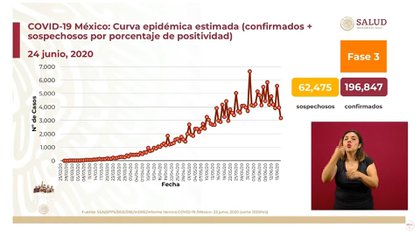 For her part, Dr. Gisela Juliana Lara Saldaña, head of the IMSS-Welfare Program Unit who spoke about the treatment of coronavirus cases in indigenous people.

He noted that the registration of people in the rural population has been low since they have managed to control cases effectively, thanks to the Program Coverage that placed 140 mobile medical units outside hospitals that operate 24 hours a day to care for any patient who goes to external consultation service.

He noted that after being diagnosed, they are admitted to the hospital or redirected, depending on the case of their disease, this in order that when they enter the hospital they can become infected with the coronavirus.