The country has already surpassed Italy in the number of deaths and the infections are close to 300,000

Four and a half months after the first case of COVID-19 was detected in Mexico, the Ministry of Health (SSa) reported that, at the moment, there are already 35,006 deaths, 299,750 accumulated positive cases of coronavirus and 29,839 active cases (that is, who had symptoms in the last 14 days).

In the last 24 hours, the country had a total of 4,482 new coronavirus cases and 276 deaths, an increase of 1.5% and 0.8%, respectively, this time surpassing Italy and ranking fourth in countries with the highest number of deaths caused by the disease, according to  Johns Hopkins University. Despite this, Mexico has decreased the estimated deaths from week 26 to week 27 by 45%.

In the case of the recovery curve, the patients in this group increased by 13% in the same period.

On this occasion, the block of states to identify patterns of occurrence of the epidemic focused on the northwest region: Baja California Sur, Nayarit, and Sinaloa. 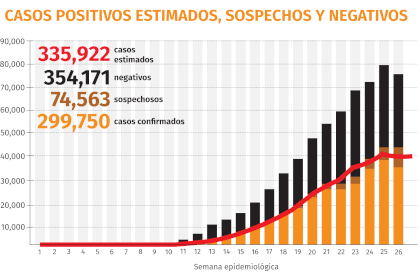 Baja California Sur has had a progressive increase in transmission. It currently has 29% of the total estimated cases. This is part of what is contemplated in mathematical projections; in the last week, confirmed cases amounted to 52%, recoveries to 8%, and mortality decreased by 79%.

Of the five municipalities that make up the tourist entity, La Paz keeps increasing its cases; however, the mobility of the state has been considerably reduced, so Hugo López-Gattel recognized the effort of Governor Carlos Mendoza Davis.

In Nayarit, the trajectory is equally upward, but part of the initial outbreak that was expected. From week 26 to week 27, the entity presented an increase of 7% in estimated cases with 2,484 estimated cases.

In the capital and Bahía de Banderas, a tourist area, the epidemic is on the rise. Likewise, in Jalisco, there are higher transmissions. 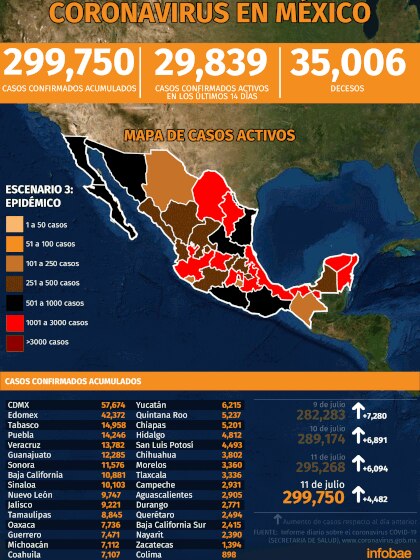 On the other hand, Sinaloa reports 11,167 cases. From week 23 the transmission of infections began to drop, however, the undersecretary of health asked not to trust himself because at least in the most recent week, he no longer continued to drop, so “you have to be expectant before a risk of spikes”.

This entity registered, from week 26 to 27, an increase of 1% in estimated cases. Most of its municipalities that increased their infections are now continuing to decrease. “Sinaloa is a success story, as well as CDMX.”

In this sense, deaths had a 44% reduction in their occurrence. The municipality with the highest incidence of cases in Sinaloa is Guasave.

Regarding occupation and hospital availability until July 12, the IRAG Network reported that there are 16,289 general beds available and 13,078 (45%) occupied. Currently, the entity with the highest saturation in general hospital beds is Tabasco, as it has an 18% capacity compared to 82% occupancy.

For its part, Nayarit registered 79% of general occupation before 21% available; and Nuevo león 77% against 23%.

It is worth mentioning that as long as the epidemic risk traffic light does not change, it remains in force, where 17 entities are in high-risk orange and 15 in high alert red. 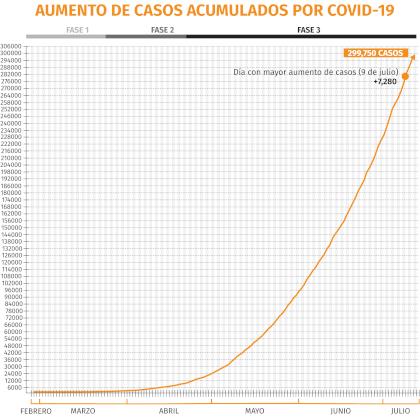