Geraldine Ponce, deputy of the National Regeneration Movement (Morena) for Tepic, capital of the state of Nayarit, responded through her Facebook account to the messages in which users on Twitter and other networks have criticized her for uploading a photo at the top of the Sangangüey volcano, where she posed with her blouse in her hand, wearing a sports top.

“I have realized that my photo on top of the Sangangüey volcano, characteristic of Tepic, has caused controversy. ‘That a deputy should be more serious’, ‘that I’m posing in my underwear’, ‘why did I take off my blouse’ … I just want to tell you two things about this photo: That I will never stop exercising my freedom of expression because of my gender, and no one should. And that the world would be better if there weren’t so many macho men and women. We have fought a lot to make visible and eradicate gender violence so that we ourselves are promoters of this discourse that denigrates us. P.S.It was a sports top, not a bra … and even if it was”, Wrote the legislator.

It was on November 22 that the deputy caused a stir on social networks after publishing the image that she mentioned on her official Twitter account.

Apparently, the federal legislator had proposed to climb the Sangangüey hill, in her native Nayarit, a goal that she fulfilled and decided to immortalize the moment through a photograph: “ The purposes are to be fulfilled and to be here, on the iconic Sangangüey hill It was one of the ones I did for this 2020. And for 2021 I have another purpose! ”She wrote along with the photo.

But, just as she mentions, attention was focused on the detail of the blouse and, as a result of that, clear comments with macho and misogynistic spirits rained down on her. And unfortunately, it is not the first time that Geraldine has been attacked in this way, since she has been the victim of an endless number of slander and attacks since she took office. 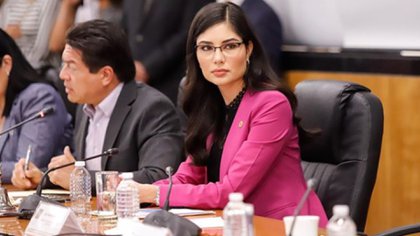 Geraldine Ponce was involved in a scandal on May 30, when a video about her and Beatriz Gutiérrez, AMLO’s wife, came to light (Photo: Instagram @geraldineponcem)

And the attacks have come to him on social media and even from his own colleagues. The most recent episode was precisely this November 25, the International Day for the Elimination of Violence against Women.

The deputy of the National Action Party (PAN), Rodolfo Pedroza, in a meeting of residents of a Tepic neighborhood, warned them that other politicians would go to make promises, “But it is not the same to win a beauty contest than to govern a municipality, they are totally different things”.

In addition, in a Facebook post from which he later retracted, the PAN wrote “one thing is to model and another very different to govern”, noting that although both trades require talent and preparation, they are very different, “shoemaker to your shoes ”, He indicated.

For the deputy, this meant clear aggression originating from misogyny and machismo. In an interview with Infobae MexicoThe legislator pointed out that it is not the first time that Pedroza has launched against him with such comments, although he says he is aware that it is an attack with political overtones.

“He just took the copper out of the person who is: a misogynist man who dedicates himself nothing more to revile and demerit the work of others… They are drowning kicks, ”he accused.

The legislator explains that the PAN seeks the mayorship of Tepic in the following elections and that precisely, in local polls, she appears as the favorite of the citizens to occupy that position. Even though she clarified that he has no intention, until now, of running for the municipal presidency of the capital of Nayarit, but to dedicate itself to solving the problems of citizenship in issues of drinking water or repairing streets. 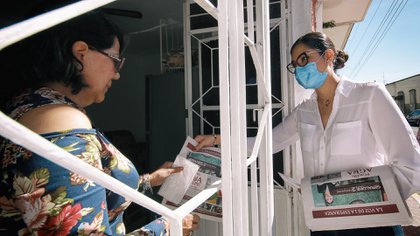 Geraldine has been the victim of other slurs, more delicate: on social networks, on more than one occasion, they have invented an alleged affair with the president.

“Something very unfortunate on the part of society because that’s where the attacks, insults, slander come from and I think it is something that must be stopped. I continue to maintain a respectful and institutional relationship with both the president and his wife “, laments the deputy, indicating that all these malicious comments are one more campaign against her, part of a dirty war strategy.

But what disappoints her the most is that many times she receives offenses from other women, “it is sad because I think that, now more than ever with everything we see that happens every day against women, it is when we must show sisterhood towards all of us ”.