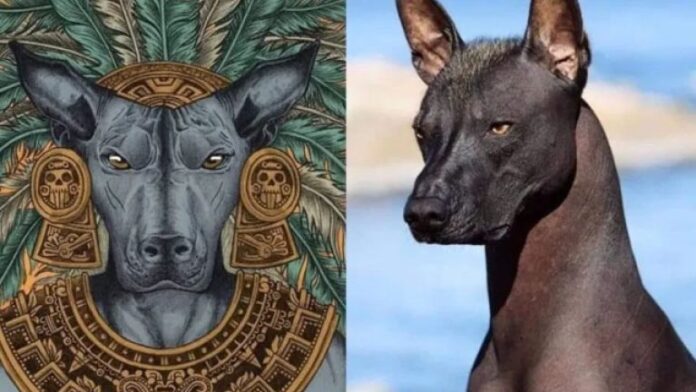 The Xoloitzcuintle breed is named Heritage of Mexico City, due to its ancestral value and endemic to Mexican culture

It’s a canine breed that has been in Mexico for more than 7,000 years.

When the Spanish arrived in the Aztec territory, they were amazed at the wealth that surrounded them. From beautiful flowers to exquisite food, Europeans knew the idiosyncrasies of a community whose culture was based on tradition and spirituality.

In addition to these gifts endemic to Mexico, there was a creature that the Spanish first mistook for a dwarf horse. It was the Xoloitzcuintle, one of the oldest dogs on the American continent. Due to its etymological origin, the term Xoloitzcuintle means ” deformed dog “. And it is its lack of fur and the early loss of its teeth that most characterizes this breed.

In mythology, Xólotl was the god of transformation, considered the twin brother of Quetzalcóatl and represented as a man with the head of a dog. For this reason, the Xoloitzcuintle was seen as a sacred animal, a guardian in the life and death of man. It was believed that he accompanied the master during his trip to Mictlán, and that is why he sacrificed himself and was buried next to the owner’s grave.

During the time of the Conquest, the Spanish used the Xoloitzcuintle as a source of food. And being so tied to the indigenous religion, they did not lack an excuse to begin to eradicate the race.

The Xoloitzcuintle was on the verge of extinction and was sent to the Sierra de Oaxaca and Guerrero for its survival and reproduction. There he used his instincts for hundreds of years until he slowly repopulated the surrounding areas at the beginning of the 20th century.

After the Mexican Revolution, characters like Diego Rivera, Frida Kahlo and Rufino Tamayo, adopted the Xoloitzcuintle as a national symbol. It was sought, through various expressions of identity, to recover the Mexican culture that had been dissipated in the attempt to Europeanize the country in the Porfiriato.

In the 1950s, the Canophilic Federation of Mexico announced that if measures were not taken, the breed would disappear completely. This is how an expedition with experts began to find Xoloitzcuintles in the most remote territories of Mexico. 10 pure and healthy were found, and with them the breed was revived.

After struggles, the Federation finally achieved this August 2016 that the Xoloitzcuintle breed was recognized as a Heritage of Mexico City, and a plausible icon that speaks of the identity and value it has in Mexican culture today.