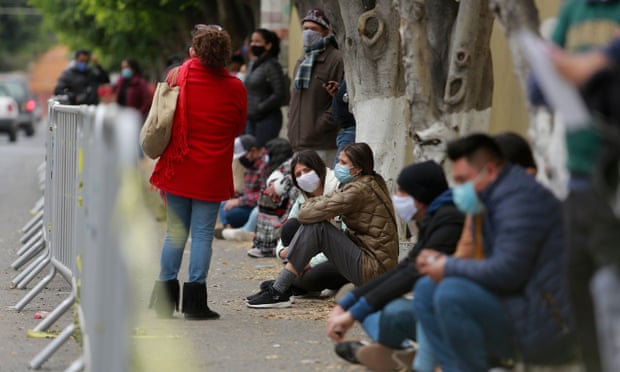 Rodolfo spent an hour after aggravating hour trying to register his elderly mother for a Covid-19 vaccination through a Mexican government website, only for the system to crash repeatedly.

“I spent three days fighting with the website,” he said. “My mom would have been unable to do it without me.”

After the site launched on Tuesday, millions of Mexicans over 60 who tried to register were met by an error message for days on end. And even when the page loaded, other users reported further delays while a separate government agency checks official ID numbers, only to deliver a message of “No response”.

Many countries, including Canada and EU member states, have struggled to roll out their vaccine programs but Mexico’s disastrous launch came at a particularly bad time.

The country’s daily Covid-19 death toll averaged more than 1,000 during January, while hospital beds, oxygen tanks, and intubation drugs were in short supply. The official death toll is now more than 163,000 – the third highest in the world.

The crashing health secretariat website only fuelled the sense that the government’s response was awry.

“It feels like a placebo,” Bárbara González, a political analyst, said after enrolling her parents for vaccinations. “It’s hard to believe things will start to get better when they have done such a poor job until now.”

Human rights groups also raised concerns that many people, including migrants from other countries and internal migrants, do not have an official ID number. “Health is a human right that cannot be denied to anyone for any reason, including their nationality or immigration status,” said Erika Guevara-Rosas, Americas director at Amnesty International.

Mexico was the first country in Latin America to receive Covid-19 vaccines and started vaccinating health workers on 22 December. But the pace has slowed to just 4,365 doses a day, according to Bloomberg’s vaccine tracker, and at the current pace, it would take a decade to vaccinate all Mexicans.

Mexican health officials expect more doses of the Pfizer vaccine and 400,000 doses of the Sputnik V vaccine to start arriving later this month – quantities insufficient for the country’s 750,000 frontline health workers, according to the Associated Press.

Health workers have complained that administrators have been vaccinated first. Questions have also been raised over-vaccinating teachers in southern Campeche state – where infections are low – so classes can restart.

Thousands of employees promoting government social programs known as “servants of the nation” are also being vaccinated ahead of their participation in vaccination campaigns, causing suspicions vaccinations would be used as a prop in campaigns for June’s midterm elections.

“There’s no strategy,” said Xavier Tello, a healthcare analyst. “It’s been nothing but a series of random plans.”

The website debacle coincided with an upbeat video from President Andrés Manuel López Obrador (commonly called “Amlo”) in which he said he had tested negative for coronavirus 12 days after contracting the disease.

He voiced his usual upbeat message of hope and faith, along with promises to move past the worst of the pandemic.

“We’re going to continue taking care of ourselves and having faith that we’re no longer going to get sick. And, most importantly, we’re going to save lives,” the president said.

“This month, we’re going to massively vaccinate people, this month of February. The same in March and April,” he added.

López Obrador is expected to return to work on Monday. His Thursday message spoke of solidarity – “The tragedy is making us more fraternal, more generous, more loving,” he said – though he has maintained his policies of tight-fisted austerity throughout the pandemic.

In his message, López Obrador said: “We don’t have a consumer crisis,” but restaurant owners and employees begged to differ. They banged pots and pans outside their establishments on Thursday to demand a more robust government response and a lifting of restrictions on indoor dining.

“It’s hard to sustain this,” said Abel Hernández, chef and owner of two Mexico City restaurants, Eloise and Lorreta. “It’s 11 months and we’ve had no support from the government.”

Covid vaccination of 50 years and over begins in Zihuatanejo