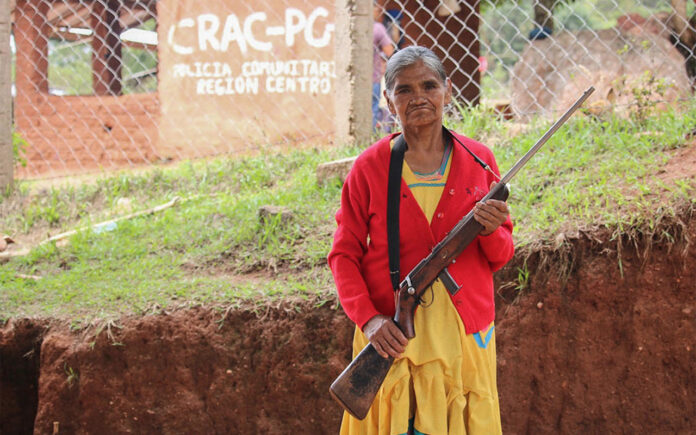 CHILAPA.- Escolástica Luna planted corn and reaped dignity. He sowed chili and harvested courage. She planted beans and marked a guide. She planted tomatoes and was enough to eat, to get her children out of jail, and to defend her territory.

Escolástica Luna is Nahua. He lives in Rincón de Chautla, a community in the municipality of Chilapa, in the center area of ​​Guerrero.

On May 10, 2006, ministerial police detained her eldest sons, David, and Bernardino Sánchez Luna. They were accused of the murder of two residents of the neighboring community of Zacapexco.

The next day, the men of the community left Rincón de Chautla for Chilapa to get reasons for David and Bernardino. They reached the Public Ministry. They said they were from Rincón de Chautla and wanted to know who was accusing the Sánchez Luna family.

Instead of explanations, all the men from Rincón de Chautla were detained. The community was left without adult men, only children and the elderly, and women, who carried out the crops, their children and, moreover, defended their territory.

It is a morning in June 2007. In Rincón de Chautla it is always cold but much more in the rainy season. The community is surrounded by a thick forest of pine and oak, through which the mist slides over the dirt road.

There is a meeting at the police station to decide several pending things. There is no commissioner in the community. He was arrested in Chilapa, when he accompanied all the men of the town to know the reasons of the Sánchez Luna.

The minors do not have classes. The most recent teacher stopped coming and the Guerrero Education Secretariat (SEG) has not sent a replacement. The institution may not even know that in this secluded place in the low mountain of 60 inhabitants, children have months without classes.

The community, now composed only of women, has a decision to make. The little adobe house at the police station has only one window. The interior is very dark. The spotlight in the ceiling gives a light of about 10 watts. The women are seen for their colorful and contrasting clothes. One wears a yellow skirt and a green sweater, another a purple skirt and an electric blue shawl, for example.

They talk, but no one from outside understands anything, because they speak in their native language, Nahuatl.

Anyone who knows how to speak Spanish told what happened there. They discussed whether to appoint a new commissioner, since they no longer had one. They exchanged opinions about who they were going to appoint, if there were only already very old men to take care of.

They agreed that while the men returned they had to appoint a commissioner from among themselves.

One of the women suggested that she be Scholastica, since she had already left the town several times to find out about her children and had participated in marches and, for that reason, she knew how to speak in public.

Neither argued or made another proposal. They all agreed. Thus, Escolástica Luna became a curator.

Demanding the freedom of David and Bernardino turned Escolástica Luna into a human rights activist.

In 2008, two years after the apprehension of her children and the other men of the town, Escolástica Luna was a speaker at the rally for the third anniversary of 17 peasants at the Aguas Blancas ford, in Coyuca de Benítez.

“Before I had never left my town, I didn’t even know how to go to Chilapa, but now I’m going wherever they tell me to go to a march or to have a sit-in,” said the woman that June 2008.

She was part of the first Collective of the Disappeared and Murdered of Guerrero headed by Javier Monroy, an organization that raised its voice to denounce the disappearances in the entity when a member of a self-organized organization known as Taller de Desarrollo Comunitario (Tadeco) was disappeared.

This civil association advised Escolástica Luna in her work as a curator, as an activist, as a speaker and as a manager. Because in addition to being an activist and peasant, Escolástica took advantage of her outings to go to see authorities and ask them for things that were lacking in the community.

During the time that she was a commissioner, Escolástica left Rincón de Chautla to participate in all the marches on the recent massacres in Guerrero and to demand the presentation of the disappeared, in addition to demanding that her children be released from jail.

Escolástica did all of the above and continued sowing together with the other women to have corn, green beans, beans, chili and tomatoes to eat. During the 34 months that the men from Rincón de Chautla were imprisoned, the plots continued the same, giving these products to feed their children.

The women of Rincón de Chautla not only took charge of the work in the fields and the children, they went out to sell their corn, beans and squash to take things to eat for their husbands in jail.

The Rincón de Chautla men were released from jail in February 2009, free of charge.

The witnesses who accused them of double murder never appeared to testify before the authority to confirm their statements.

In September 2014, Rincón de Chautla spearheaded the creation of the Community Police attached to the Regional Coordinator of Community Authorities-Founding Towns (CRAC-PF), to which 16 towns have already joined. Brothers David and Bernardino, sons of Escolástica, were the initiators.

With this police, the Nahuas of the low mountain formed columns of men to defend their villages from the incursions of armed men, coming from the neighboring municipalities of Mochitlán and Quechultenango, in which since the first decade of the century the name of Los Ardillos, made up of the Ortega Jiménez family, linked to characters who had been authorities in both municipalities.

In 2013, the incursions of these men became more frequent and the towns created the CRAC-PF in 2014.

In 2015, other towns with some relationship to the so-called Ardillos created the Community Police for Peace and Justice. Since then, the violence has not stopped.

Inhabitants of Rincón de Chautla and others of the communities adhering to the CRAC-PF have been ambushed, others have been disappeared or taken off the public transport routes and then thrown away decapitated or dismembered.

Then, Escolástica Luna and the women of Rincón de Chautla began training.

Since 2019, Escolástica has received military training.

If necessary, Escolástica Luna, who is now 72 years old, knows how to use a shotgun.

This work was carried out by AMAPOLA, which is part of the Media Alliance of the Red de Periodistas de a Pie, and is part of the Sembradoras series . Here you can check the original publication .