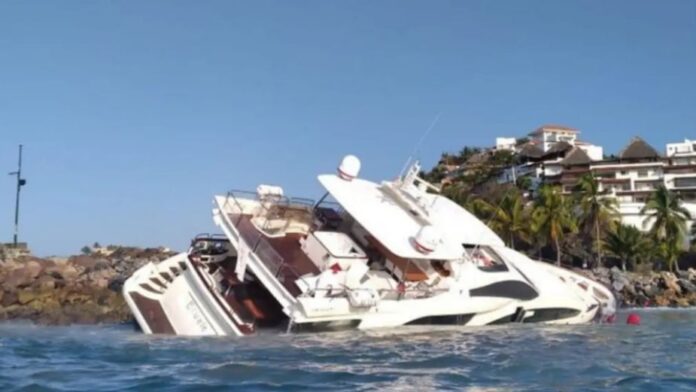 The authorities did not report people injured by this incident

During the early hours of this Monday, a yacht of at least 105 feet long suffered an accident when trying to enter the channel that leads to the Ixtapa Marina pier in the state of Guerrero, so it was stranded after colliding with the large rocks that form the channel.

According to preliminary reports, the boat named “Etuale” suffered this mishap because at the time of entering it was destabilized by the high waves, in addition, the lack of lighting and signaling complicated the maneuver and ended up hitting the rocks, leaving it aground next to Las Escolleras beach.

After the incident, representatives of the Directorate of Environment and Natural Resources as well as the port authorities attended to carry out the rescue maneuvers of the boat.

So far, no people injured by this incident have been reported, however, it transpired that at the time of the incident, nine people plus the crew were on board.

The events caused great astonishment among tourists who went to the beaches of the Ixtapa-Zihuatanejo tourist complex on Monday morning and shared various videos and photographs on social networks.

In social networks it transpired that the damaged yacht is owned by the Mexican businessman of Jewish origin, Elías Sacal, however, this information is not confirmed.