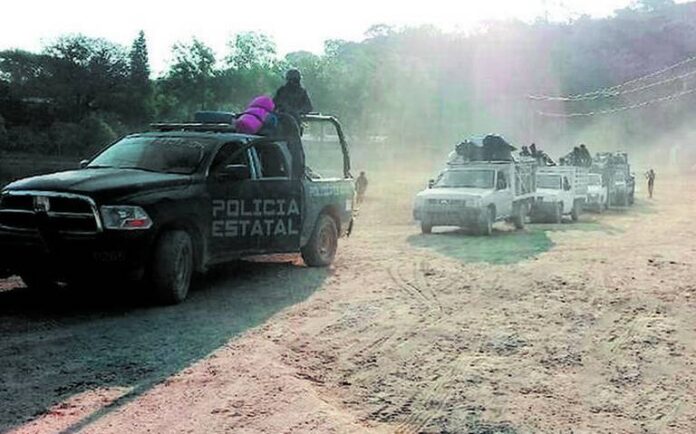 Guerrero, Mexico. Some 300 people from nine communities in the Municipality of Zihuatanejo de Azueta live in tents in the hills after two months ago around 50 men armed with Ak-47 rifles forced them to leave because they did not give them a monthly quota.

There are a total of 70 families from the towns of El Mamey, La Vainilla, Arroyo Seco, La Soledad, Puentecillos, Piedras Rodadas, Zapotillo, Pie de la Cuesta and Paso del Burro who live harassed by the criminal group called «Los Cuernudos “ said one of the displaced persons interviewed by telephone.

This organization, which is led by Flavio Delgado Cruz and his son Marco Hernández, made the first incursion into these 9 communities on May 7, starring in a shooting and then each head of the family was required of ten, 15 and even 15 thousand pesos per month.

“They took cows, chickens, wallets, and cell phones from us so that we would not have communication abroad,” said the displaced person who for security reasons did not want to provide the name of himself and the community authorities.

He said that the members of that armed group even demanded that the elderly give them money even though they replied that they did not have any because they do not work anymore.

On June 17, the residents sent a letter to President Andrés Manuel López Obrador, the head of the Ministry of the Interior, Olga Sánchez Cordero, the Undersecretary of Human Rights, Alejandro Encinas, and the president of the National Human Rights Commission (CNDH), Rosario Ibarra de Piedra, asking for their intervention to grant them precautionary measures.

“We ask the Government to send the Mexican Army and the National Guard to this part of the Sierra to arrest the criminals, but so far we have not received any response,” she said.

He mentioned that even days ago they received a reply from the president of the Guerrero State Human Rights Commission, Cecilia Narciso Gaytán, who assured them that the state government had sent Police groups to those communities and they reported no displaced families.

“That is a lie, here the police did not come to the towns, here are the houses alone and many of them with bullet wounds,” she asserted.

She affirms that the group called “Los Cuernudos” has been settled in this area of ​​the Sierra for ten years, causing terror and panic in the citizens.