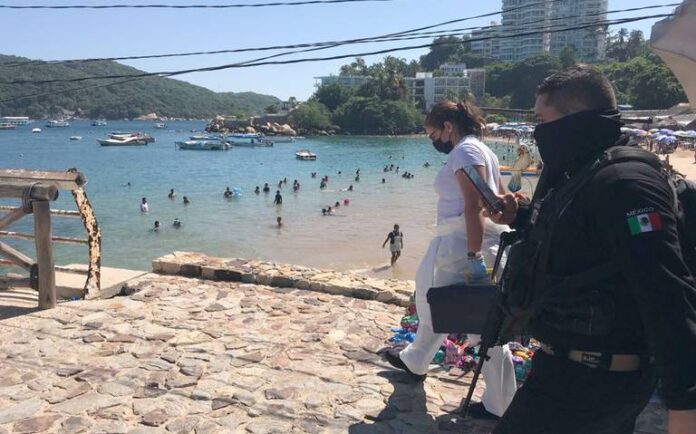 Armed individuals executed a municipal police commander who was spending his day off on Isla la Roqueta with his family.

The events occurred around 3:00 p.m. on Sunday, August 1, at this point of the Traditional Zone of the Port of Acapulco, where families and tourists, mainly from CDMX, enjoyed the weekend.

According to the data that have been collected, there was a municipal police commander identified as Edgar “N” at the beach of Isla la Roqueta, enjoying his day off along with his family.

When suddenly, two or three armed subjects came out of nowhere and opened fire against him, despite the presence of his family and dozens of tourists around the beach area.

The detonations caused bathers to run in different directions, trying not to be hit by a stray bullet. Many headed to the dock to board a boat and get out of there as soon as possible.

The criminals were pursued by infantrymen from the Mexican Navy and members of the tourist police, but they hid among the tourists who were running in panic around the crime scene, so a checkpoint was placed to conduct a body search upon arrival in Caleta and detain the perpetrators of the crime.

Personnel from the Public Ministry went to the scene to conduct the corresponding procedures and carry out the removal of the body.

It is worth mentioning that, not long ago, the officer had already suffered an attack against him, from which he emerged unharmed.

No arrests have been made so far in relation to this murder.