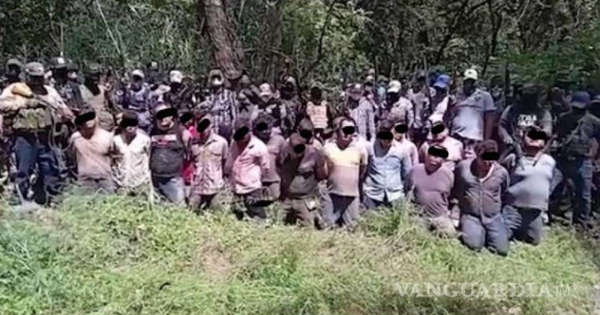 A video broadcast on social networks shows at least 15 people being questioned by men who belong to the criminal group “Los Tlalocs”.

At least 20 people were killed by men belonging to the paramilitary group identified as “ Los Tlalocs ”.

A recording released this Wednesday on social networks shows men kneeling and with their hands tied behind their backs in an outdoor field that, according to national media, is located in Iguala, Guerrero.

The video shows how an armed man with his face covered passes in front of them and points a gun at the heads of the detainees and questions their names and nicknames.

The threatened men said they worked for a man named Chucho Brito, whom they refer to as “El Patron.”

“We told them and the time has come, this square already has an owner”, it is heard in the recording.

Proceso reported that the men who committed the murders were led by Onésimo Marquina Chapa, alias “El Necho.”

According to national media, the murdered men are related to the criminal group Guerreros Unidos, linked to the case of the 43 normalistas from Ayotzinapa who disappeared 7 years ago.

In the almost eight-minute video that began to circulate on Facebook pages and was replicated in WhatsApp groups, the elected Mayor of Iguala of the PRI-PRD coalition, David Gama Pérez, is also accused of alleged links with drug trafficking.

The recording was replicated afternoon on Wednesday, after the discovery of four men executed with bullets and with signs of torture in the trunk of an abandoned vehicle outside a house owned by also a former local deputy, David Gama.

The Guerrero State Prosecutor’s Office confirmed this morning the discovery of the bodies of four men in Iguala. The Associated Press, which cited state prosecutors , reported the victims were linked to a local criminal group known as La Bandera. One of the men was wanted by the authorities in connection with the murder of two other people.

Iguala has long been under the scourge of organized crime violence. In 2014, police officers working for a criminal organization kidnapped 43 students from the Rural Normal School in the town of Ayotzinapa and handed them over to the cartel, which apparently murdered them.

On Thursday, prosecutors also reported that Baby’O, the most famous nightclub in Acapulco – the most important tourist town in the state – was damaged in a fire.

Local press reported that unidentified men intentionally set the scene on fire, but authorities said they were still waiting for the nightclub’s lawyers to turn over the surveillance camera videos so they could investigate the incident.

Guerrero has seen a reduction in the number of murders in recent years, thanks in large part to the decline in the opium trade. Many farmers in the area grow poppies, but drug cartels have focused more on fentanyl smuggling, helping to reduce violence related to the harvesting of opium paste.

However, this year new state and local governments are scheduled to take office in Guerrero, and these transitions have generally been marked by violence.