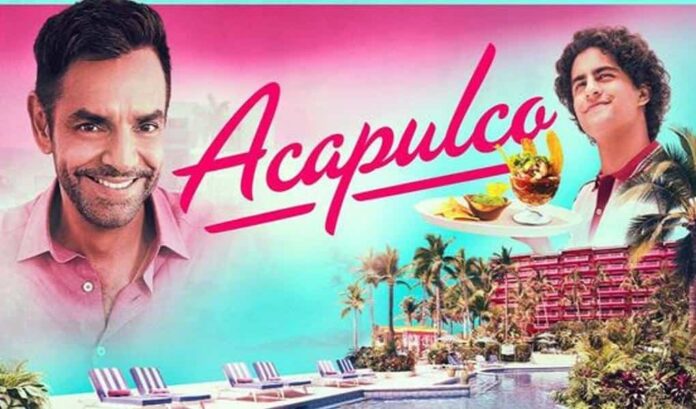 Mexican actor Eugenio Derbez knew he had to be the one to make a change in what was being put out on TV.

Growing up watching TV shows like “Gilligan’s Island,” “The Love Boat” and “The Beverly Hillbillies,” Derbez wanted to bring part of his life to the TV screen.

The comedy series follows 20-something Máximo Gallardo, played by Enrique Arrizon, whose dream comes true when he gets the job of a lifetime as a cabana boy at Las Colinas, the hottest resort in Acapulco. However, he soon realizes that the position is far more complicated than he ever imagined and that to succeed, he must learn to navigate a demanding clientele, a mercurial mentor and a complicated home life, all while avoiding shortcuts and temptations.

Derbez says the authentically Mexican, feel-good story, which is told in both Spanish and English, takes place in Acapulco during its heyday, in 1984. Derbez narrates and plays the present-day version of the main character, Gallardo, who is now a billionaire living in Malibu, California.

As the older Gallardo unfurls the story of his youth to his nephew, Hugo, played by Raphael Alejandro, it serves as a cautionary tale for the young boy as he learns of the difficult choices and decisions Gallardo made, many of which still haunt him today, despite all of his outward signs of success.

Fueling Gallardo’s ambition to succeed is his pure-hearted determination to carve out a better life for himself and his family. With his father having passed away, he is protective of his sister, Sara, played by Regina Reynoso, and his hardworking mother, Nora, played by Vanessa Bauche.

Nora’s eyesight is starting to fail, and Gallardo wants to ensure they can afford the medical care she desperately needs. 1of5

Arrizon was excited to be able to play the younger Gallardo.

“It was a great opportunity to be chosen by (Eugenio), and it’s a dream come true,” Arrizon says. “It was hard for me to adjust, but that was the character for me. I went to Puerto Vallarta not knowing that this was going to be a really huge production. When I got there, the atmosphere was amazing. Did you know that they changed the color of the entire hotel, just to make it more 1980s? They really paid attention to the details.”

Arrizon also got a chance to travel to the 1980s while on set.

“I wasn’t born until a decade later,” he says with a laugh. “I had long chats with my mother, father and grandparents about how Acapulco was in those days.”

Derbez says he wants the audience to have fun with the show.

It was important for him to show the other side of Mexico, his home country.

“In the ’80s, Acapulco was famous for being the hottest spot for the entire world,” Derbez says. “People from all over the world went there – royalty, politicians, Hollywood stars. It was the place to be in the ’80s. There were many stories of the wild parties that were there. I wanted the series to be fun but also have some heart. It’s a series that reunites all the family, and they can watch it together. It’s a story full of values of love, friendship, romance and self-reflection. People are going to like it.”