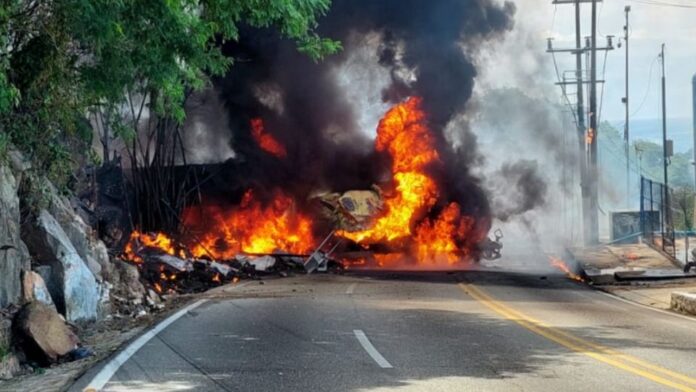 Two injured are the preliminary result of the explosion of a fuel tanker that was circulating on Avenida Escénica, in Acapulco, Guerrero.

The accident occurred at 12:50 p.m. on Monday, August 15th, at the Pichilingue subdivision, in front of the water tank of the Potable Water and Sewerage Commission of the Municipality of Acapulco (Capama).

The first version of the authorities indicated that the vehicle that transported Pemex gasoline had no brakes and collided with a bus where the driver and a passenger were injured. The information indicated that the car overturned meters ahead in a curve, which caused the immediate explosion of the unit.

Firefighters from the municipality arrived at the scene and tried to put out the flames for almost an hour and a half. So far, it is reported that the fuel would have leaked into the pipes of the hydraulic network of the subdivision.

Until now, the state of health of the truck driver has not been reported and circulation remains closed. The fire reached the part of the vegetation in the area and the fumarole could be seen from various points of the city.