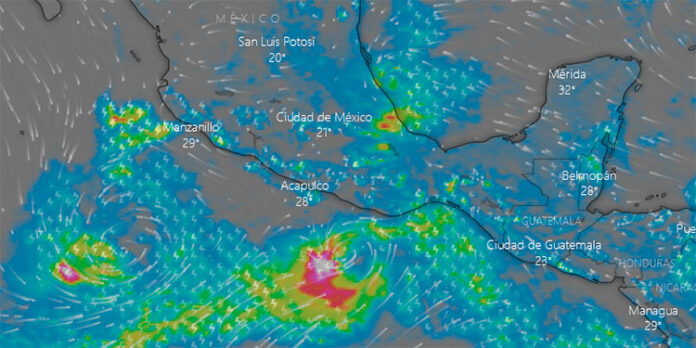 Oaxaca (Mexico), 16 Sep. Tropical storm Lester continues to advance over the Mexican Pacific and moves near the coasts of Oaxaca and Guerrero, the Mexican Meteorological Service (SMN) reported on Friday.

According to the body dependent on the Water Commission (Conagua) of Mexico, torrential rains will occur in these two entities of the Latin American country, with gusts of wind of up to 70 kilometers per hour and waves of three meters in height.

In addition, the Mexican authorities warned of two channels of low pressure in the Gulf of Mexico and over the Sierra Madre Occidental and central Mexico, which will cause heavy to intense rains in the states of Puebla, Veracruz, Chiapas, Tabasco, Nayarit, Jalisco, Colima, Michoacán, Campeche, Tamaulipas, San Luis Potosí, Sinaloa, Querétaro, Hidalgo, Tlaxcala, State of Mexico, Mexico City, Morelos, Yucatán and Quintana Roo

“The rains mentioned above will be accompanied by electric shocks and possible hail fall, they could also generate an increase in the levels of rivers and streams, as well as landslides and floods,” reported the authorities, who asked the Mexican population to take precautions and attend official recommendations.

In addition, the SMN indicated that the hot to very hot evening environment will continue with temperatures above 35 degrees Celsius in areas of the northwest, north, northeast and east of the Mexican territory, as well as in the states of the Pacific Ocean coast and the Peninsula of Mexico. Yucatan, in the southeast.

Storm Lester, located off the coast of Oaxaca, in the south of the country, generates constant rains in the eight geographical regions that make up the entity.

The State Civil Protection Coordination of Oaxaca issued a special alert due to the increase in rains for the next 48 hours, mainly in the regions of the Isthmus of Tehuantepec, Costa, Sierra Norte, Sierra Sur and Valles Centrales, where the Oaxacan capital is located.

In these regions, permanent monitoring is maintained in the rivers whose flow could increase suddenly during or after an intense rain, such as the Copalita, Verde, Espiritu Santo, Ostuta, Novillero and Los Perros rivers located on the Oaxacan coast.

In mountain towns such as Tanetze de Zaragoza, Talea de Castro, Santa María Yaviche and San Juan Yaeé interned in the Sierra Norte region, the intense rains caused by the storm have hindered land communication on the state network that runs about 80 kilometers.

Falling trees, landslides and detachment of the asphalt are the main damages observed in this stretch of road, which is frequented mainly by inhabitants from the original Zapotec populations.

These roads, battered by the constant rains, are the only access routes for dozens of mountain towns.

Due to the storm, Civil Protection also recommended that the inhabitants not cross rivers and streams on foot or in vehicles during and after an intense rain or storm, because during the current rainy season there have been losses of human life due to current drag.

Similarly, the alert is maintained in the communities located in the Oaxacan mountains due to the fact that the intensity of the rains can cause landslides of hills in inhabited areas.