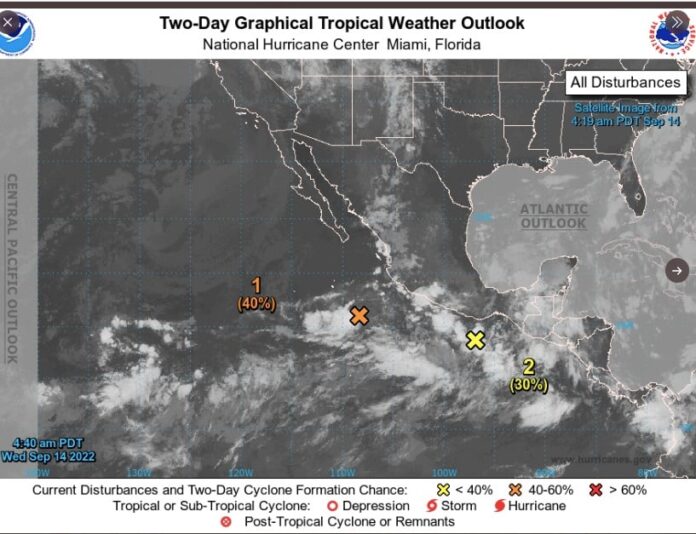 Mexico.- In its follow-up notice to the cyclone and hurricane season, the National Hurricane Center of the United States highlighted an imminent merger between the two low-pressure zones currently active in the Mexican Pacific.

The agency noted that it continues to monitor these two areas of altered weather off Mexico’s Pacific coast, each with a medium chance of becoming a tropical depression as it meanders off the coast over the next few days.

The agency marks one of these disturbances with a 60 percent chance of cyclone formation in five days that has been associated with a low-pressure trough. It also highlights that conditions would be conducive to development if the system remains offshore and a tropical depression could form as it moves slightly off the south coast over the next few days. It marks its shift over the next 48 hours to the west-northwest near the southern and southeastern coast of Mexico.

The other system is marked by the National Hurricane Center of the United States, with a 40 percent probability for cyclonic development in five days, and it is located southwest of Manzanillo and with the possibility of merging with the disturbance described above, and becoming in tropical depression in the next few days.

For its part, in its morning warning of this September 14, the National Meteorological Service locates the first low pressure zone with a 30 percent cyclonic probability in 48 hours and with a decrease of 60% in five days, 210 kilometers to the south-southwest of Punta Maldonado, Guerrero, moving slowly to the west-northwest.

Similarly, it indicates that the second increased its cyclonic probability in 48 hours and in five days 500 kilometers southwest of Playa Pérula, Jalisco.

During the session of the Conagua technical committee held on Tuesday the 13th, the coordinator of the SMN, Alejandra Méndez Girón, indicated that between September 15 and 17 the development of a tropical storm is expected, that in the numerical models a very large displacement is observed. close to the coast of Baja California Sur, but in others, a direct impact is marked in the area.