At the beginning of the year, various activists planted in the Luis Pasteur Park

The Luis Pasteur Park, which is located next to the Senate of the Republic, has begun to give a marijuana plant, due to the rain and warm weather that has been registered in Mexico City.

Several groups settled in camp at the beginning of the year in the vicinity of the Senate to demand that legislators regularize cannabis. However, they only received the support of the Senators from Morena Jesusa Rodríguez and José Narro.

Therefore, two square meters of the public garden, made the sembradío, with the aim that this was the “first non – clandestine plantation”.

“This is the first non-clandestine planting of marijuana,” said the activists, referring to the first seeds.

In this regard, Julio Menchaca Salazar, president of the Justice Commission of the upper house, asserted that the law for the regulation of marijuana, which was generally approved last Wednesday, will contribute to combat rates of violence in Mexico.

“Peasant farmers would no longer be criminalized, as they are often forced to plant marijuana illegally. The state would regulate production chains and guarantee the quality, “explained the legislator.

It is worth mentioning that the proposal includes a regulation for therapeutic, scientific and recreational purposes, as well as conducting research around this plant, which for 100 years has been considered prohibited in Mexico.

At the crossroads of the two most important avenues in Mexico City: Insurgentes and Reforma, and in front of one of the two chambers that make up the country’s Legislative Branch – that of senators – is Plantón 420. It is surrounded by red fences placed by the Cuauhtémoc mayor’s office and guarded with discretion by two policemen from the Secretariat of Citizen Security, this settlement took citizen appropriation of public space a step further.

In the Luis Pasteur park, a group of people stood up to exercise their political rights and to demonstrate in favor of the regulation of marijuana and against the criminalization of its use. But also to create the first libertarian space, as Leopoldo Rivera Rivera, a member of the Mexican Cannabis Movement, calls it, where you can consume cannabis without being criminalized. It is a safe area where sales are prohibited, and it is also the first non-clandestine plantation in 100 years.

“Has several meanings. First, it is a political mobilization to plant ourselves and it also has the connotation of planting. In this sense, we are planting and planting marijuana in order to claim the rights that in some way the Supreme Court of Justice of the Nation has already claimed in relation to the free development of personality and the right to consume and cultivate marijuana for personal purposes. “He says as he walks the plant.

The first plants were planted on February 2. It was not planned like this, but it coincided with the Candlemas Day, in which the purification of the seeds for sowing is carried out. In Plantón 420 there are 350 marijuana plants and in two planters are the tallest and leafiest: María Sabina – in which is the Supervisor, a 2.5 meter high bush – and Tin Tan, which is located at the entrance the plantón and whose smell welcomes visitors.

Many of the plants have been sown intentionally, but others have not. During the protests that took place in the Senate of the Republic last year, one of the central activities –in addition to speeches, concerts, and marches- was to consume marijuana in front of the camera. In these interventions, many users threw coconuts in the park’s planters – as the seed is popularly called – and the rain favored its growth. 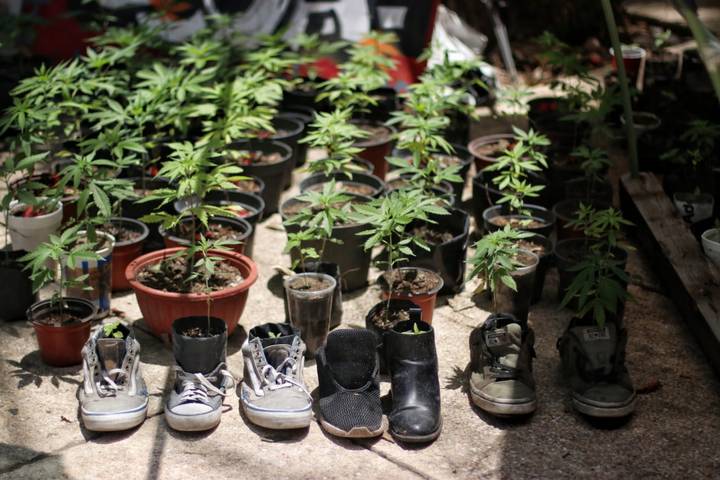 Leopoldo Rivera explains that due to the orange traffic light, access to the camp is controlled and at all times, sanitary measures are respected, such as the mandatory use of a mouth cover, sanitization of footwear, dispatch of antibacterial gel, healthy distance is maintained and visitors who consume marijuana cannot stay longer than 30 minutes. And it is that in addition to a plant is a safe consumption area.

“We have two shifts: from 11 to 3 and from 4 to 8, they can come to smoke their churrito “JOINT” and stay for a maximum of 30 minutes. We believe there will be a lot of demand. There is many potheads in the city that have nowhere to smoke because people point them out. We already want that to end. We invite you all to come out of the closet ”, Leopoldo advises the users of marijuana.

And he adds: “if they want we can help them, we can go to a conference in their neighborhood and explain to people that being a marijuana user does not make us criminals and that most of us work, pay taxes, we are normal people, we just like marijuana as who likes soccer and does not harm third parties ”.

Once this libertarian space has been consolidated, as they call it, the intention is to replicate it in other areas of the city and other municipalities, although there are no formal talks with any authority on the subject. The idea is that it works well and that we can replicate it in other parts of the city, in other city halls and then in other cities. Because they are rights that the Supreme Court has already recognized for all citizens of the country, it must be seen as a federal matter.

We appeal to responsible consumption, users are people who work and study. To that, we appeal, to that type of use. “Here we are firm in defense of everyone’s rights. We thank those who do not consume for understanding this fight, which is not to affect anyone, it is a fair demand so that no more human rights are violated and that the police stop distracting themselves in persecuting people who are mostly peaceful and productive. “Concludes Leopoldo, who after the interview cares for a man who was traveling by bike and was attracted to Plantón 420.