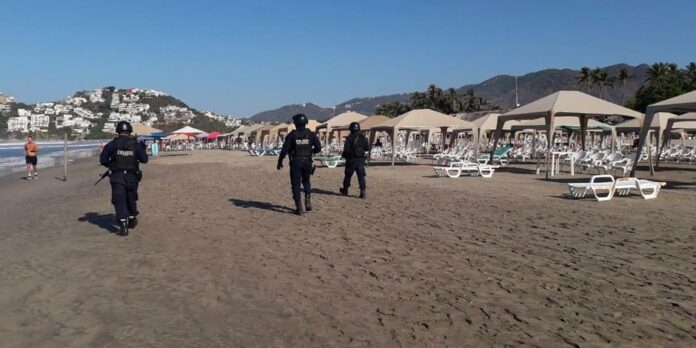 The authorities remind tourist that the entry with drinks and food is not allowed on the main beaches of Acapulco and Zihuatanejo.

It is expected that more tourists will arrive in the state this week, calling on all service providers to enforce health protocols

The governor of Guerrero Héctor Astudillo Flores, when reporting on the actions to prevent the spread of contagion between visitors and locals during Holy Week, stressed that so far the tourist destinations of the entity have a general average of 46 percent hotel occupancy, and recalled that during the yellow traffic light the capacity of 60 percent is allowed in hotels.

He stressed that it is expected that more tourists will arrive this week, insisting on his call to all service providers, hotel and establishment managers, restaurateurs and to be the first to ask visitors to enforce the protocols that are implemented in the entity.

For his part, the head of SEFINA, Tulio Pérez Calvo asked the state population to take better care of their health these days off by staying at home and allowing tourists who come to generate income and reactivate the local economy without exposing themselves, avoiding attending places with greater agglomeration and recreation.

Likewise, he recalled some of the actions not allowed in the entity, in which he highlighted the mandatory use of mouth covers, that entry with drinks and food is not allowed on the main beaches of Acapulco and Zihuatanejo, as well as the Guerrero coast, warning that it is forbidden to camp in some of them, and recalled that the beaches of the entity only allow people from seven hours to 18 hours.

It should be noted that in Guerrero that brigade members of the State Government continue daily with actions of the # PónteloPónselo campaign, to raise awareness among service providers in Chilpancingo markets about the correct use of face masks.

While as part of the actions of the Security Operation Easter Week 2021 in the state of Guerrero, elements of the State Police reinforce their surveillance tours in different tourist spots in the port of Acapulco and Zihuatanejo.

The agents maintain actions on the beaches of the port of Acapulco, where they perform peripherals to urge tourists and locals to respect the sanitary measures to avoid the spread of COVID-19. The police officers of the different special units of the State Public Security Secretariat also keep a shelter in the tourist spots of Zihuatanejo de Azueta.