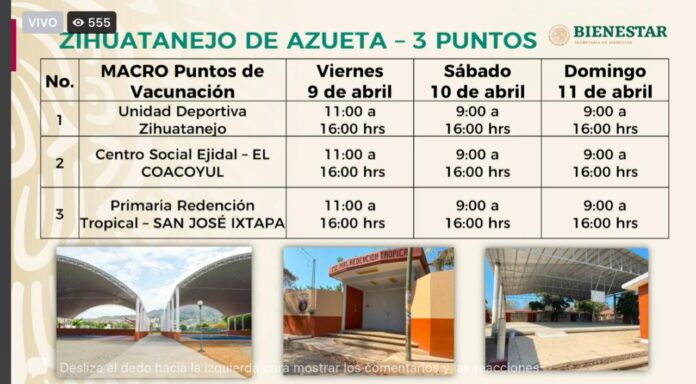 Continuing with the national vaccination strategy, this Wednesday the second dose will be applied to older adults in the municipalities of Eduardo Neri and Tlalchapa and on April 9, some 29 thousand older adults from the municipality of Zihuatanejo will be immunized.

The foregoing was reported during the update of the epidemiological traffic light data in Guerrero led by Governor Héctor Astudillo Flores, accompanied by the Secretary of Finance and Administration, Tulio Samuel Pérez Calvo and the head of the Executive Office, Alejandro Bravo Abarca.

“I want to inform you that everything is proceeding normally,” said the governor when reporting the conditions in which vaccination is carried out in the five macro points in Acapulco.

In a link, the delegate of the Federal Programs in Guerrero, Iván Hernández Díaz, accompanied by the members of the State Vaccination Council, Margarita Hernández Hernández and Marcela Fuentes, confirmed that vaccination with the dose of Pfizer for older adults in the municipality of Zihuatanejo de Azueta will be on April 9 for 29 thousand people.

Governor Héctor Astudillo Flores, with authorities that make up the Coordination Table for the Construction of Peace, were informed that priority municipalities of Guerrero register a reduction in crime rates of 16.88 percent during the first quarter of 2021 compared to the same period last year, while the actions implemented in tourist centers for the Easter holiday season in terms of safety and to prevent COVID-19 infections were reviewed.

Governor Héctor Astudillo Flores, in addition to reiterating his call to maintain efforts to inhibit criminal acts in Guerrero, asked to be attentive to collaborate in the third and last stage of vaccination in the application of the first dose against COVID-19 for older adults and medical personnel in Acapulco that begins this day.

In the virtual session, the Secretary of Public Security, David Portillo Menchaca, reported on the criminal acts in the last 24 hours, as well as the indicators in the priority municipalities of the general consolidated that record a reduction in security rates of 16.88 percent during the first quarter of 2021.

Governor Héctor Astudillo instructed the Secretary of Public Security to continue giving attention to the case of the minor injured in a regrettable way, last Friday.

The Secretary of Public Security, David Portillo, reported that all medical expenses have been paid, in addition to having permanent attention to Mario’s family, before any request arises, in addition, he pointed out that from the beginning they have assumed the responsibility and the willingness to support in everything that is required as has been the instruction of Governor Astudillo Flores.

Portillo Menchaca added that care is provided in a private hospital and medical expenses have been fully covered, I instructed to promptly follow up on this reprehensible fact.

The State Attorney General, Jorge Zuriel de los Santos Barrila, reported that this instance has at its disposal the state elements involved and there will be no impunity in this case.

For his part, in addition, Governor Héctor Astudillo, recognized the work of the Secretariat of National Defense, Conafor, Civil Protection of the State, Secretariat of the Environment, Chilpancingo Firefighters and volunteers, to combat the Cerro del Toro fire that already It is controlled, as well as in other points in the State, for which he asked for the collaboration of all so as not to cause fires.

Meanwhile, the Secretary of Health, Carlos de la Peña Pintos, reported on the State outlook of the pandemic in Guerrero and the epidemiological traffic light that remains yellow with a downward trend in both estimated active cases and employment. hospitable.