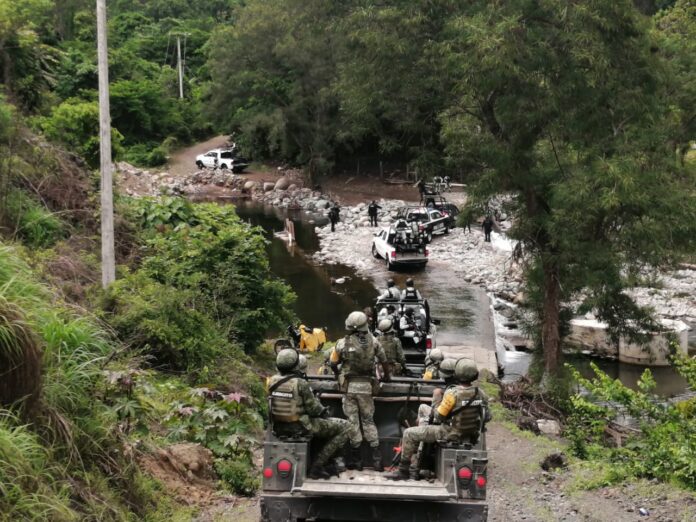 Ixtapa-Zihuatanejo, Guerrero. Governor Héctor Astudillo Flores and the authorities of the Coordination Table for the Construction of Peace reviewed the actions to prevent the rise of COVID-19 infections in this summer holiday season and the operations that are carried out constantly to communities in the mountainous area of ​​the Municipality of Zihuatanejo.

The Commander of the 27th Military zone, Federico San Juan Rosales, reported that jointly, two Operation Bases made up of the fourth Group of Mortars and the 75th Infantry Battalion, operate permanently in attention to security in the municipalities. from Zihuatanejo and La Unión de Montes de Oca and their respective communities in the highlands.

Security actions, added General San Juan Rosales, are constantly deployed to the communities of the Zihuatanejo mountains and are sometimes coordinated with the National Guard and the State Police, while no victims are reported in that area due to criminal activities.

Governor Héctor Astudillo Flores urged the authorities that make up the Coordination Table to maintain attention in these localities of the Zihuatanejo mountain range, with the support of the Secretariat of National Defense, the National Guard, and the State Police, whom he recognized your support on this issue of protecting families who have reported being victims of intimidation for criminal acts.

The Secretary of Public Security of the State, David Portillo Menchaca, and the Attorney General of the State, Jorge Zuriel de los Santos Barrila, reported on the criminal incident recorded over the weekend, as well as the investigations that are being carried out regarding these cases.

Governor Héctor Astudillo and the authorities of the State Coordination Table followed up on the evolution of the indicators due to the pandemic caused by COVID-19, as well as the restrictive measures agreed and published in the Official State Newspaper to mitigate the increase. of contagions in the State and special attention in tourist areas due to the increase in the influx of visitors.

The Secretary of Tourism, Ernesto Rodríguez Escalona, ​​reported that this weekend an important tourist movement was received, registering on Sunday with a hotel occupancy of 60 percent and on the instructions of Governor Astudillo Flores, operations to supervise sanitary measures were carried out in the tourist area in Acapulco, Taxco and Zihuatanejo in coordination with the Navy, National Guard, National Defense, State Police, and municipal police.

In addition, the weekend a face-to-face meeting was held with hoteliers who were asked to reinforce antigen tests to detect COVID-19 in their workers and prevent contagion in their facilities and protect the health of visitors with stricter measures of preventive health care such as the mandatory use of a mask.

For his part, the Federal Delegate in Guerrero, Iván Hernández Díaz, reported that the vaccination process has been concluded in the central area of ​​the State with the AstraZeneca vaccine in the first dose for the age of 40 to 49 years, so he enlists the application of the second dose to close with the stage of application of the biological to this age range.

The Secretary of Civil Protection, Marco César Mayares Salvador, reported that the State presents light clouds in the Central region, Acapulco, part of the Mountain and the North zone, in addition, the situation of rains typical of the season continues.

The Secretary-General of the Government, Florencio Salazar Adame, the Commander of the Eighth Naval Region, Julio César Pescina Ávila, the Commander of the Ninth Military Region, Eufemio Alberto Ibarra Flores, the State Coordinator of the National Guard were present at the working session. , Lucio Vergara Gómez, the Delegate of the FGR, Fernando García Fernández.

Despite the fact that since last weekend members of the Mexican Army and the National Guard arrived in the Sierra de Zihuatanejo area, in Guerrero, as demanded by 70 families displaced by pressure from the Los Cuernudos criminal group, the residents reported that the situation in the area remains the same and nothing has changed.

The displaced recalled that they sent official letters to President Andrés Manuel López Obrador and federal government officials on June 17, requesting their intervention to grant them precautionary measures: “We ask the government to send the Mexican Army and the Guardia National to arrest criminals but so far we have not received any response.

By telephone, the families insist that the federal and state forces remain in that place.

In this sense, and through a press release, the State Secretary of Public Security, David Portillo Menchaca, assured that since Saturday “elements of the State Police, the Jaguar Group, the National Guard and the Municipal Police, toured the area on Friday and they prepare a new patrol this Saturday in communities of the Zihuatanejo mountain range with the purpose of providing security to the residents with whom they had social proximity ”.

The official said that the operation deployed in the Zihuatanejo mountains and that is reinforced by elements of the Mexican Army, was implemented since last Friday on the instructions of Governor Héctor Astudillo Flores and the authorities of the Coordination Table for the Construction of Peace, after a citizen complaint made to the media on Thursday by Gerardo “N”, who said he was a resident of a community near Pantla.

Portillo Menchaca pointed out that “security and surveillance tours were carried out in crime prevention, in patrols and on foot – land, by different communities of the municipality of Zihuatanejo de Azueta, such as El Sandial, El Zapote, El Mamey, Pie de la Cuesta, El Zapotillo and El Hujal, having social proximity with the majority of its inhabitants and local authorities, without corroborating massive displacement of families ”. Meanwhile, displaced families from about 10 communities in that area, denounced that the agents only made tours but did not install a permanent base, as the residents had requested on several occasions.

They also regretted that neither the military nor the National Guard wants to search the houses that have been attacked with bullets.

For his part, Gerardo “N” acknowledged that last Friday Governor Héctor Astudillo Flores communicated by telephone, “At that time I was in the state of Morelos, on my way to Mexico City to buy an antenna that It is going to be used in the villages to install a civil radio communication system. I told him that indeed there have been no deaths or injuries, but that they are threatening us and we are living in the hills. “

He announced that this Monday he will seek to speak with the governor from a hill to tell him that he did not keep his word that he was going to come to this area: “the people want the group of criminals to be arrested so that they can return to their towns, and continue with his normal life “we want to be in our homes and continue working on our land, sowing corn and taking care of our cattle, in my case I am a rancher.”

He said that they hardly received a reply from the president of the Guerrero State Human Rights Commission, Cecilia Narciso Gaytán, who affirmed that the state government had sent state agents to those communities and they realized that there were no displaced persons, but Gerardo “N” assured that “it is a lie, the police did not come to the towns; here are the houses alone and many of them with bullet holes ”.