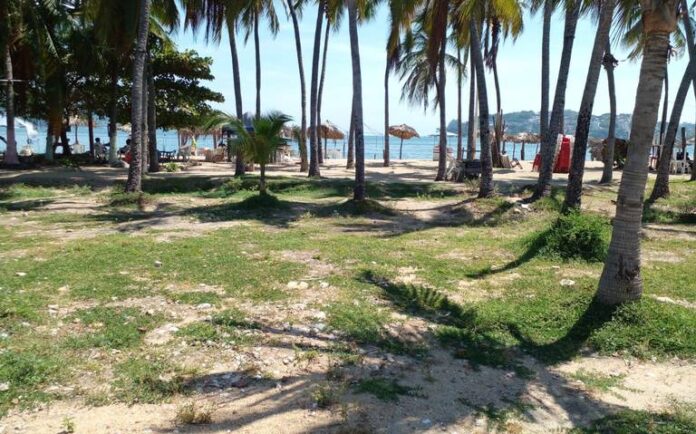 ACAPULCO, GUERRERO (September 26, 2021).- Fourteen months ago, the authorities of the three orders of government evicted more than two thousand tourism service providers that used to occupy the federal area of ​​the Carabalí, Tamarindos, and Papagayo beaches to start a project “to recover the sand strip”, or at least that’s what they said at the time.

Afterward, there was talk of recovering the “good image” of the beaches of Acapulco, however, the situation of invasion, corruption, oblivion and a bad tourist image of this beach destination continues worst than ever throughout the Bay of Acapulco.

At dawn on July 18, 2020, authorities from Profepa, Semarnat, and the Coordination Table for the Pacification of Acapulco made up of municipal and state government corporations, carried out the surprise eviction of the tourist service providers, as well as the removal of furniture such as chairs, umbrellas, lounge chairs and awnings from the beach area as part of the program launched by the federal government.

During the surprise eviction on the three beaches, El Golfito, what had been used for years as a tourist attraction for tourists and Acapulqueños, was also dismantled, with the intention of “reinventing themselves”, but in more than a year, nothing has happened, and the abandonment of the area is worst than ever.

The eviction, at that time also included the beach known as Manzanillo Beach, where the creation of the first inclusive beach for people with disabilities was announced, back in 2019, a project that never came through and remains in total oblivion by the three levels of government.

The inclusive beach was one of the most important projects that became known with the recovery of the federal zone, even an investment was announced which in more than a year, did not arrive either.

The tourist service providers evicted at dawn on July 18, 2020, with the police force including the National Guard and the Army with heavy machinery, had between 20 and 25 years working the federal area that was recovered by the authorities of the three levels of government with the argument of rehabilitating the areas with a program to create a new tourist image for Acapulco.

Given the eviction and protests of disagreement that tourism service providers made in the tourist area, Mayor Adela Román Ocampo, justified the process that says “are the instructions from President López Obrador, there will no longer be more privatized beaches”.

“The people have to be the owner of its beaches, the owner of its natural riches. It is being rearranged throughout the country, in Cancun, in Zihuatanejo, in Los Cabos, beaches are being rearranged everywhere,” he said in an event in the Municipal hall of the Papagayo Park town hall, ten days after the removal of furniture, bunches of chairs, tables, and umbrellas from the beach area.

Mayor Adela Román Ocampo also affirmed that these beaches were a nest for criminals and that the area where they had warehouses to store their belongings were used as places to carry out acts of violence, so their removal was successful with the federal program.

Thousands of beach-sellers were evicted on a coastal strip more than three kilometers long, where the government authorities literally removed all merchants and tourism service providers, taking away their source of employment without prior notice.