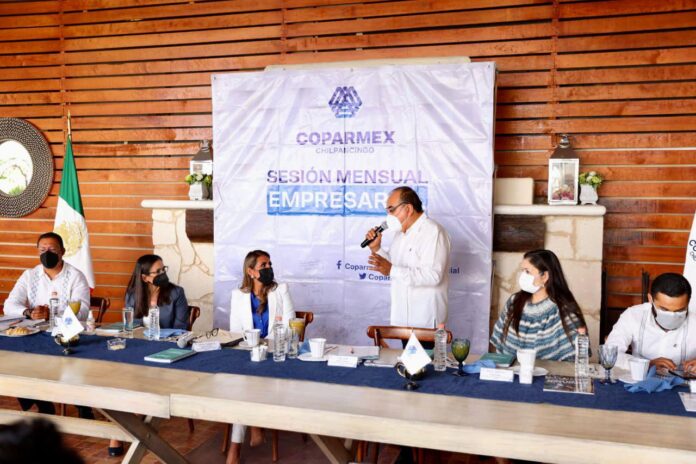 Governor Evelyn Salgado Pineda assured that she does not have any relatives working in the administration, and warned of the immediate dismissal of any of her officials who dares to ask businessmen for “moches” or “diezmos” in exchange for contracts, after reiterating her commitment to transparency and accountability.

Thank you for watching

“We must eradicate the culture of tithing ” diezmos” and moches”, she called this Wednesday before members of the Employers’ Confederation of the Mexican Republic (Coparmex), whose session she attended as a guest.

“If someone (of your officials) is asking, please let me know and at that moment that person leaves. We are not going to allow acts of corruption,” she said, emphasizing that as governor “I will never ask anyone for a peso.”

He pointed out that his government works every day in favor of transparency, accountability and to lay the foundations for progress, but also for a revolution of consciences and to break paradigms and stereotypes.

“The people’s money has to return to the people, it is not so that it stays in the hands of one, two people or families. I don’t have any relatives working in the state government,” he assured.

During the business meeting, Joel Moreno Temelo, leader of Coparmex in Chilpancingo, asked for an “alliance” for economic growth, combating the Covid-19 pandemic and security for the productive sector.

“We urge you not to regress the achievements in security issues, emphasizing the crimes of kidnapping, murder, and extortion, because this greatly affects any economic activity,” he told her.

The governor offered them the “open doors of her government” and assured them that their opinions will be considered, in addition to the fact that it will not be the only time they meet, and emphasized that she is working to prevent the pandemic from affecting the local economy.

“We have put our effort into building a climate of peace and security in our state, it is not an easy task,” she said, and highlighted her strategy for pacification and peacebuilding, to which he called them, in coordination with the three levels of government.

She promised to address the causes that generate violence and confront high-impact crimes such as extortion, homicide and robbery, femicide, and kidnapping. “We have to team up, they have to support us (because) one person cannot, she always needs her people and the sectors. This is not my government, it is our government, we all built it”.

Its purpose, she explained, is that tourists from the center of the country who travel by road to Acapulco and the coast of Guerrero go to this capital to eat pozole, chalupas, torrejas, white atole and to drink mezcal or lemon balm, among other characteristic foods of the entity.

She reported that the project is almost finished and that they are looking for a space to build it, and that Mayor Norma Otilia Hernández Martínez is also collaborating in this, and that “in this way we are going to support the local economy.”