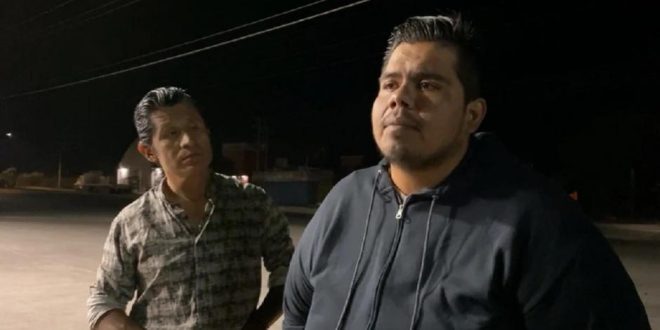 The journalist Jesús Pintor urged AMLO to rectify his path and leave the policy of “hugs, not bullets,” since citizens “are unprotected.”

The journalist Jesús Pintor Alegre complained to President Andrés Manuel López Obrador (AMLO) for his security policy that, from his point of view, leaves Mexicans unprotected. Jesús Pintor was deprived of his liberty on December 27 and his case became known after the dissemination of a video of two chained communicators.

“I am very charged with emotions. Physically I’m fine, I did receive some blows. But what seems complicated to me is emotional aggression. Sorry, my voice breaks”, said the journalist Jesús Pintor Alegre ‘Por la Mañana’ with Ciro Gómez Leyva.

He added that from his perspective, the current security policy of the AMLO government, guided by the phrase “hugs, not bullets” has not worked and it is time to change it.

“I do make a strong claim to Mr. Andrés Manuel López Obrador to rectify his path. That the path of hugs and not bullets is useless. We have lots of things. The citizens that he governs are unprotected. We live in barbarism simply and simply,” he said.

The journalist was deprived of his freedom on December 27, but his case was not publicized until the first days of January when the video of Fernando Moreno and the chemist Alan García chained up was released through the Escenario Calentano page, saying that “they were paying the consequences” of what is published on this page.

Jesús Pintor pointed out that he never saw the people who held him captive, although he did experience the aggression of those who accused him of having offended certain people in the Calentano Stage Facebook posts. Painter pointed out that he does not manage that page, like Alan García, who is a chemist by profession, and the lawyer Fernando Moreno.

“Those days were full of doubts, confusion, full of fear, in a place I don’t know what it was, with quite rabid treatment, with some blows, threats, quite marked emotional play,” the journalist recounted in testimony.

Jesús Pintor Alegre expressed that a new chapter in his life begins on December 27, especially in the journalistic area. Well, that day, they blindfolded him and took him away in a truck when he was going to a stationery store in Ciudad Altamirano, the municipal seat of Pungarabato.

After about an hour and a half of travel, they took him to an unknown place where they made accusations and questions, and held him captive for several days.

Journalist Pintor Alegre said that he was never told the reasons why he was released. And he only realized that Fernando Moreno was with him. Other reporters from the region arrived at the place in Coyuca de Catalán where they were taken.