The risk maps prepared by the authorities reveal that a third of the population is exposed to high or very high levels of seismic danger. Researchers analyze the risks to prevent the probable damage of a major earthquake in the country

In the waters of the Mexican Pacific, at about 4,500 meters deep, a group of researchers from UNAM and the University of Kyoto are looking for any sign of movement of the Guerrero seismic gap, a 110-kilometer-long site that has been for more than a century does not register a great earthquake despite being located in an area of high seismic activity in Mexico. In a country where more than a thousand earthquakes of magnitude equal to or greater than 3.5 are registered each year, this place gathers the eyes of experts, all with the same questions: how much energy has accumulated in that place and when will it detonate?

Being in interaction with five tectonic plates, Mexico is a large seismological laboratory. The earthquakes are not distributed equitably in the country, 80% of the earthquakes are registered along the coasts of the states of southeastern Mexico: Guerrero, Oaxaca, and Chiapas. For experts, the Guerrero gap is an anomalous place to the extent that a significant earthquake, greater than 7, has not occurred for more than 110 years. Around the gap, measurement equipment has accounted for the epicenter of violent earthquakes such as that of September 19, 1985, with a magnitude of 8.1. The rupture at that time, lasting only 45 seconds off the coast of Michoacán, left at least 10,000 dead and 50,000 injured in the country. 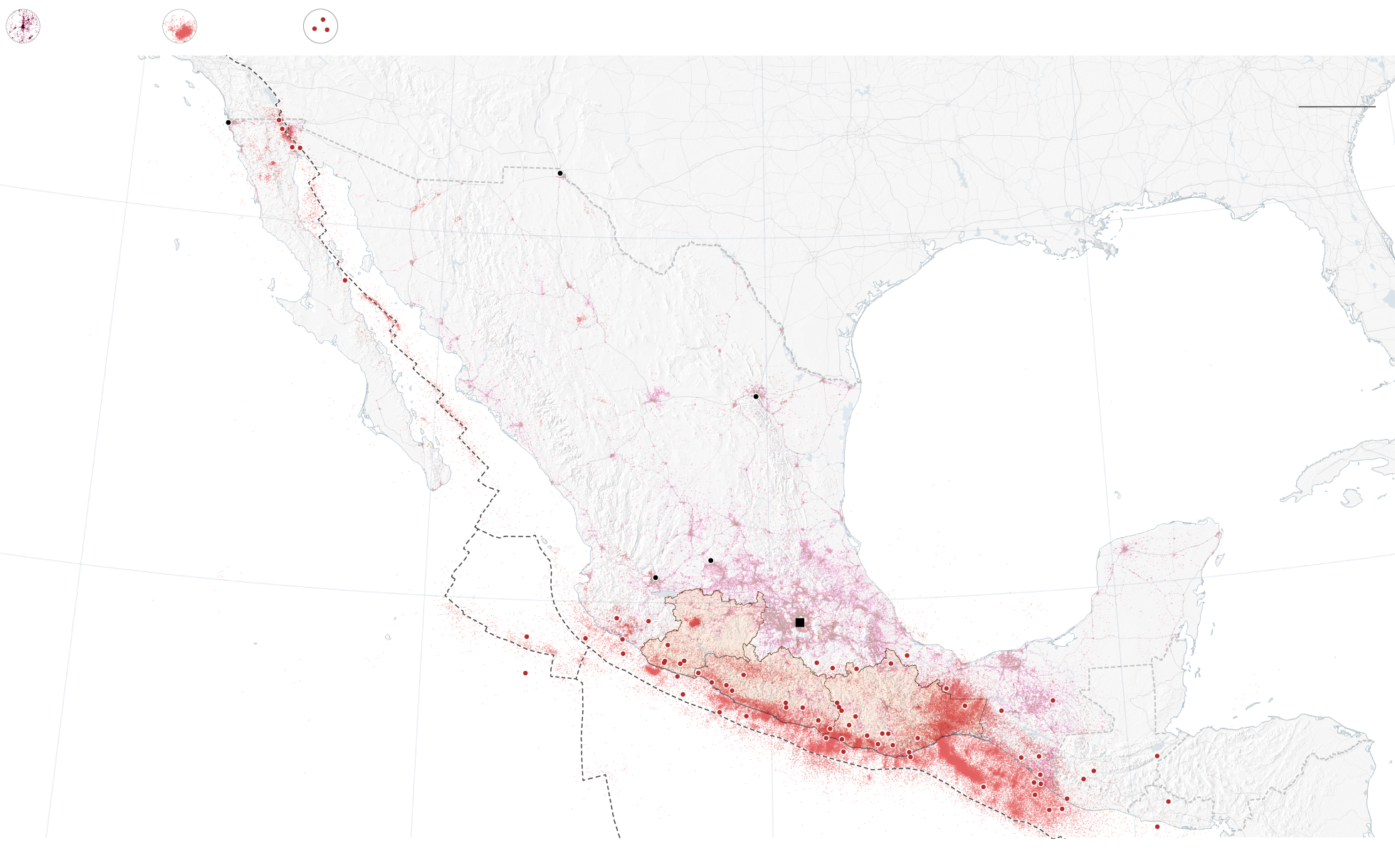 The states of Michoacán , Guerrero and Oaxaca concentrate 80% of the earthquakes produced in the last century

The mathematical models of the specialists suggest that the gap represents one of the greatest threats to largely populated areas such as the Valley of Mexico, where around a fifth of the country’s population is concentrated, with some 23 million inhabitants. However, the center of the country is not the only focus that has experts in seismicity and civil protection on edge. The fear of a future great earthquake extends to the main coastal cities of the Pacific, from Nayarit, through Jalisco to the cities of Michoacán, Guerrero, Chiapas and Oaxaca. According to the risk maps prepared by the Mexican authorities, 30% of the national population is exposed to high or very high levels of seismic danger. 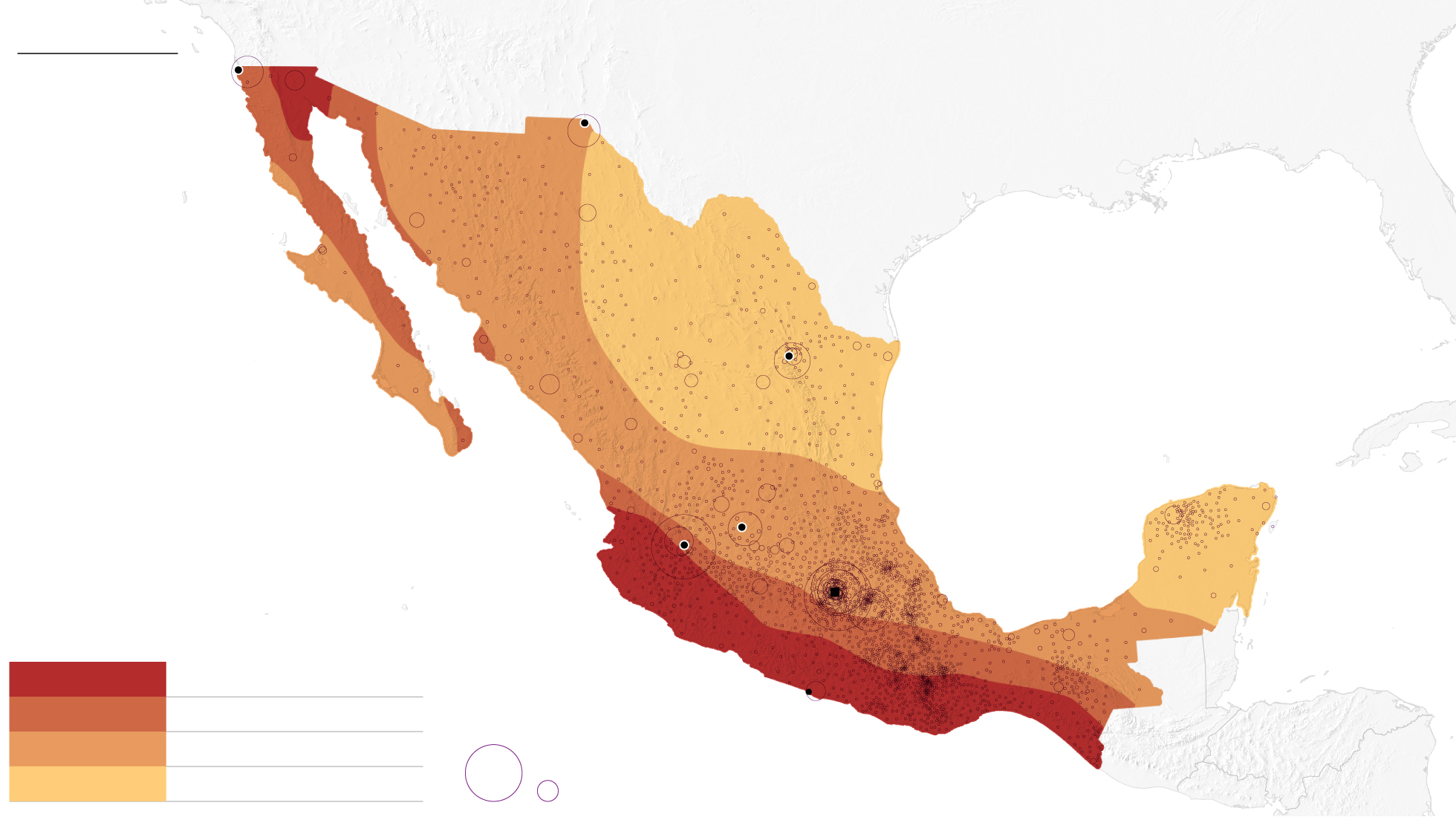 The researcher of the Institute of Geophysics of the National Autonomous University of Mexico (UNAM) Víctor Cruz Atienza He is at the forefront of one of the most ambitious earthquake projects in Mexico. The starting point of this collaboration is marked on the calendar with the date March 11, 2011. On that day, a magnitude 9 earthquake struck the shores of the city of Sendai, in Japan. “In this context, a group of Japanese colleagues approached us, the Department of Seismology [at UNAM], to discuss the possibility of carrying out a joint study in Mexico, where many common seismological phenomena appear in both subduction zones. ”Says Cruz Atienza. After numerous meetings and with the guarantee of having a budget of close to six million dollars, the collaboration of Mexican researchers with experts from the University of Kyoto, in Japan, became a reality at the end of 2016.

The deployment and maintenance of the first amphibious seismo-geodetic network in Mexico and Central America have allowed them to better understand the tectonic plates in the gap. Cruz Atienza explains that in the last five years the seismic gap has widened towards the southeast of the State of Guerrero, now covering a total of 230 kilometers. In the first segment, about 110 kilometers long, located on the Costa Grande of Guerrero, between Acapulco and Papanoa, the last great earthquake occurred in 1911. “Something interesting happens in that segment, which is why we are studying it. It seems that there the slow earthquakes are releasing a considerable part of the energy, in such a way that its effective long-term accumulation is slower, thus explaining that 110 years have elapsed without a rupture ”, the researcher refers.

Slow earthquake activity in the oldest part of the seismic gap does not totally exclude the risk of a next major earthquake at that location. One of the scenarios of the researchers based on the measurements made during the last five years is that an earthquake begins right in the neighboring segment that goes from Papanoa to Copala, where the last great earthquake occurred 64 years ago, and that the propagation from this break it generates a chain reaction in the rest of the gap. “What is more likely is that an earthquake begins southeast of Acapulco, close to where the 1957 earthquake broke, which collapsed the Angel of Independence, where energy is accumulating more quickly and that this rupture spreads within another gap, the one that stretches between Acapulco and Papanoa, producing a much larger earthquake.

Tsunami: the other great threat

Faced with a tectonic rupture of this magnitude, coastal cities such as Acapulco and Ixtapa Zihuatanejo could also experience tsunamis. Preliminary estimates made by researchers at the University of Kyoto of a tsunami produced by a magnitude 8 earthquake off the coast of Zihuatanejo point to average waves of 5 meters and an evacuation of at least 6,000 people among residents and tourists in that city. In the last 288 years, more than 60 tsunamis have hit the Mexican Pacific coast, according to data from the Secretary of the Navy. Tsunamis of distant origin have registered waves of 2.5 meters in height and those of local origin have had waves of 5 meters on average and, exceptionally, up to 10 meters in height.

The possible magnitude of this great earthquake is based on the extension of the region involved and the width of the seismogenic zone. With the help of acoustic GPS technology, world-class robotics, and ocean floor seismometers, this group of researchers deciphers the movements of tectonic plates in the depths of the Pacific Ocean off the coast of Guerrero. This sophisticated equipment measures how the continental crust under the sea is deforming in the short and long term, very close to where the oceanic plate of Cocos and the continental plate of North America come into contact.. Data collected on the ocean floor and on land make it possible to trace the traces of tectonic shifts and thereby reconstruct a history of movement over time. This information is essential to estimate the seismic potential of the region and with it the associated danger. Cruz Atienza expects the project to conclude in March 2022.

Specialists agree that it is not yet possible to predict an earthquake or avoid the danger it poses, but to the extent that sufficient technical information is available, the associated risk of a future earthquake with an epicenter in the Guerrero gap can be mitigated. Despite the challenge posed by the pandemic, the research team at UNAM and the University of Kyoto continue to develop sophisticated physics-based models to simulate a hypothetical earthquake and tsunami scenarios. In addition, education and risk management experts from Mexico and Japan model mitigation strategies with local civil protection authorities. All actions that seek to reduce the effects of a probable great earthquake in the country.

The risk posed by a major earthquake in Mexico City

“For Mexico City, it will be the worst test of his entire life,” says Arturo Tena Colunga, a seismic engineer, and researcher at the Autonomous Metropolitan University (UAM), when asked about a possible earthquake in the Guerrero seismic gap. “A lot of energy has accumulated that is going to cause what is expected to be the worst earthquake in terms of magnitude and size in a long time in Mexico, comparable to that of 1932 and stronger than the earthquake of 1985, which was terrible in terms of impacts. ”Explains the academic whose specialty is the rehabilitation of structures. Tena Colunga says that the gap can generate an earthquake of between 8.2 and 8.4 degrees of magnitude with an epicenter of between 10 to 20 kilometers, “more superficial”, which makes it a greater threat. “It is a monstrous earthquake, which must have us all in distress.

The eyes of experts such as Tena Colunga fall on Mexico City because the capital and its surroundings live between 20 and 25% of the country’s population, which makes it a death trap to unleash a large earthquake. In addition, much of the city is built on lakes, which produces a greater amplification of seismic waves. Therefore, the importance of studying and maintaining research in the Guerrero gap. “The more information you have, the more ways you have to prevent. The one being monitored can tell us what the characteristics of the movements are like and how they affect structures and civil works ”, explains the expert. “Being able to know at what size we are facing can allow the structures that are built to be made with more modern regulations,

Tena Colunga affirms that the city has advanced in its construction regulations to avoid huge losses when an earthquake strikes. He explains, for example, that the 2017 earthquake that hit the capital caused less material damage than 1985 one and the greatest damage occurred in residential areas such as the Roma neighborhood, which has old infrastructures, not completely designed to withstand such strong movements. like the one that occurred that year. “Unfortunately the old cities are not 100% prepared. Mexico City has a great historical-cultural heritage, with very beautiful, very old structures that are inhabited and that takes a lot of work to strengthen them; although with the new structures we have advanced because they are made with more modern regulations ”, he says.

Engineering, he adds, has come a long way since the 1970s, when structures with greater resistance and greater stability began to be designed. “It is important to define well what we know as seismic danger, that is, to know how large the demands will be on the infrastructures, based on the seismic force that can be generated and thus determine how much a structure can move”, explains Tena Colunga.

“Before the structures were designed to be elastic, now that is not enough, we have evolved to what is known as resilient seismic design, that is, it is not only acceptable that life is saved, but that it does not have to dislodge people because the structure is very damaged, ”he says. The problem, however, has to do with the costs of these structures and the interests of investors, who aim to lower their expenses.. That is why the role of the authorities that regulate construction in the city must be one of constant vigilance so that these new regulations are met. “The goal is to try to ensure that the new structures are not damaged. Ideally, an earthquake occurs, we are going to be scared, but nothing more serious happens. That would be my dream, although it is utopian in cities with this development ”, concludes Tena Colunga.